The start of a new quilt. This is fabric left over from the Blushing Peonies Quilt. I’m working to use it up because my storage drawers and boxes are just about full and there’s really nowhere to put both the large and small fabric pieces.

I decided to use them instead of leaving them lying around gathering dust.

What I have so far is this compilation of strips and block sections created by starting with a large piece of fabric, slashing it, then slashing the resulting pieces further, and inserting bits of fabric and recompiling the original block with the insertions included. I’ve done two largish blocks so far, the resulting piece is about 20″ wide x 22″ long – a good start.

I’ll keep adding segments to what I have here intending to end up with a good lap-size quilt 50″ x 65″. What I’m after is large sections with strong insertions – particularly showcasing both blushing peonies fabric – the peach version as well as the darker fabric I used in the original quilt.

I had originally intended on doing something quite different with the fabrics based on 2 1/2″ strips but the idea I had wanted the central smaller square to be one piece (instead of 4 triangles) using the blushing peonies so the flowers would show. 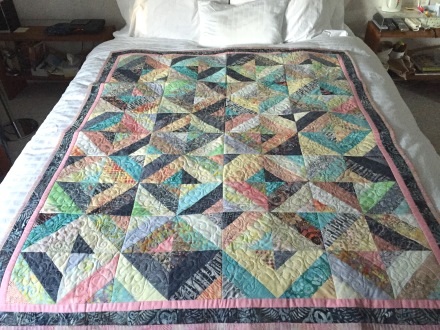 Garden Trellis – from a jelly roll

Setting up a block like that, however, proved more complicated than I was willing to take on – getting the mitred corners on the surrounding pieces was just too fiddly to bother with. Scrapped that idea for now.

So modern quilt it will be.