This is the collection of fabrics I bought to make a double bed quilt for Noah. I took pictures of the painted walls in his bedroom so I had something to work with. The selection of green batiks at Keepsake Quilting was large – many times the number if bolts I’d have been able to choose from locally! Bought backing fabric as well. It’s going to be a simple strip quilt like the one Ben has in his room:

I plan on starting it this week – shams and pillow cases, too.

I stopped off at Keepsake Quilting in Center Harbor NH yesterday. I’ve purchased fabric online and from the catalogue and so I decided to return from my family visit to Toronto via NH.

I bought fabric for a double bed quilt my great nephew Noah and some fat quarters for me. But I had to stop at that.

Oh my! Heaven for a quilter! 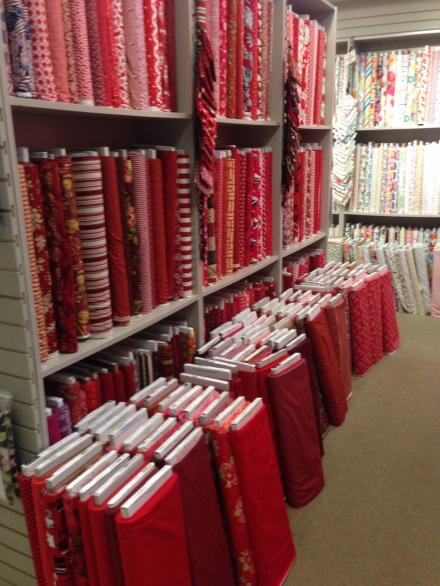 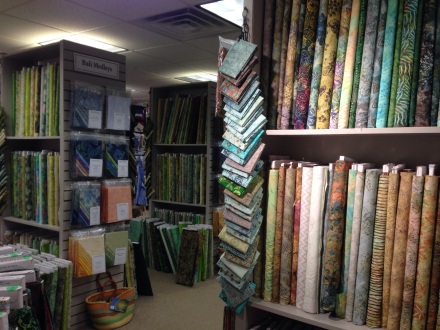 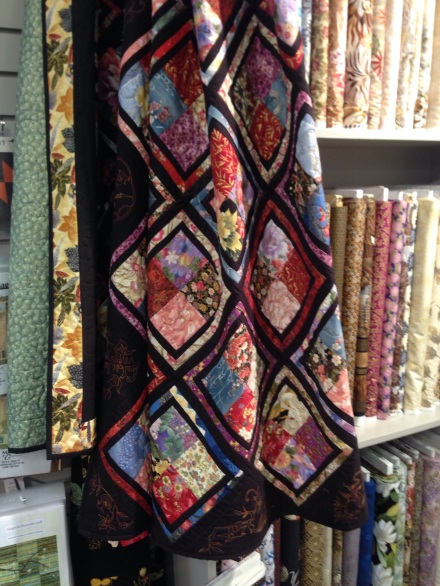 I always have a couple of phalaenopsis in bloom in my bedroom (that’s in addition to all the orchids in my living room). At the moment I have three plants in bloom – they cheer my day. They’re there to greet me when I wake. When one is finished blooming, I swap it out for another in bloom. During the winter I often have to buy a new plant that’s starting to bloom because all of my other phalaenopsis are hibernating, waiting for the days to get noticeably longer when they send up new flower spikes. I love having them around. 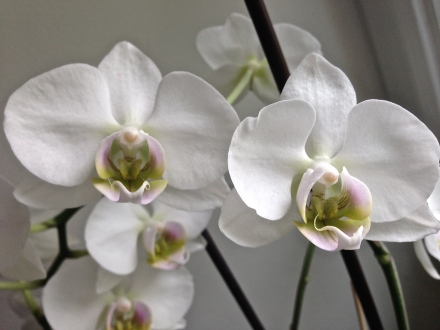 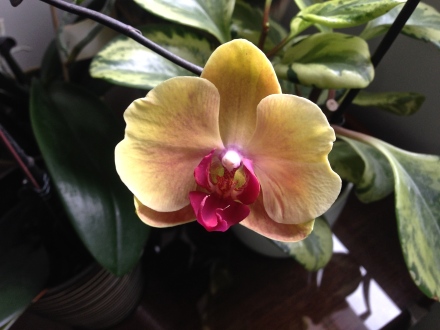 I finished the quilt last evening. It got put aside for a while so I could work on the deck deciding what to keep and what to purge, and then deciding where to put the plants I retained and weeding them. They’d all been neglected for 6 weeks while the old deck was torn down and the new deck was built. They were all crowded into my neighbour’s yard (I was lucky she was willing to plant sit for such a long time).

A couple of days ago I got back to quilting the blocks, by yesterday I had just 7 double blocks to quilt. Got that done in the afternoon. Pressed the quilt to get rid of the markings (I use Frixion pens which disappear with heat – although the marks return if the fabric gets close to freezing, I’m told). Then I trimmed and bound it. Added the label last evening.

The front of the quilt consists of 63 (6 1/2″) blocks of fabric (which started out as 7 x 7 blocks), slashed either twice or three times, reassembled – while this looks like an easy quilt, turns out it was surprisingly difficult to do – each block had to be carefully crafted, the parts adjusted, pinned, and repinned until the underneath strip looked continuous! Three strips, if they crossed one another, was particularly challenging! However, I only made one block that in the end I discarded.

The back of the quilt was inspired by an image of a white on red quilt (‘Lace”) by Weeks Ringle that I came across. I thought this would be the perfect quilt to try it on. Constructing the pieced strip took longer than I anticipated it would – although it was simpler to execute than the blocks on the front side.

My echinacea had lots of visitors yesterday. i was lucky enough to capture a couple of them.

This is my hibiscus with a flower in full bloom yesterday. I just love the brilliant yellow shading into red. There are three more flowers about to open – not today, but in the next day or two.

I had to visit a nearby garden centre to pick up some potting soil. I saw this canna lily and couldn’t leave without it. The colours complement the hibiscus and make a very cheerful focus among the greenery on my deck.

This is now the view from my living room window. The back fence is gone, and half of my container garden has been discarded. There’s still a bit of finishing work to do – it’ll get done tomorrow.  The finished deck is a 20′ wide x 16′ deep construction, raised above the ground an average of 8″.  Now there will be space to have friends over for tea! 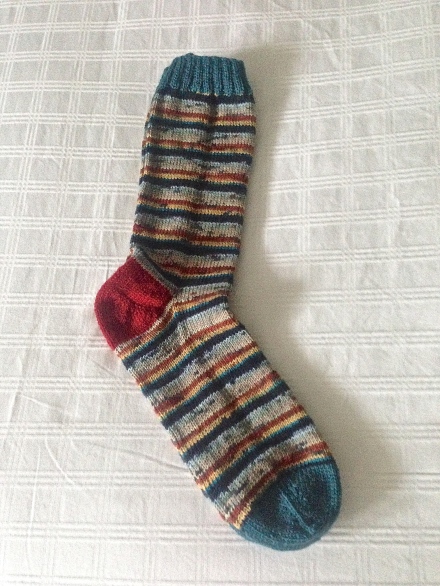 I had already begun this pair of socks, almost ready to turn the heel on the first sock when a friend asked me to knit a pair of socks for her husband – she’d pay me of course. As always, the problem is the cost of a pair of my socks – I simply won’t work for less than $1 an hour!

As I turned the heel I realized I could just make a longer foot and then I’d have socks for Edouard. They’ll go in the mail to him today. As a gift.

The coreopsis in the garden bed across from my front door is in full bloom – it blooms all summer. I love these tiny delicate yellow flowers. They make me smile!

The pansies beside them have done well this year, too.