I finished the quilt on Thursday – quilted the last four squares and the border, then added the binding and label. 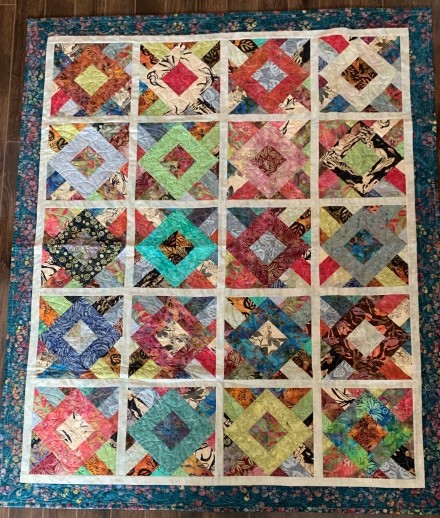 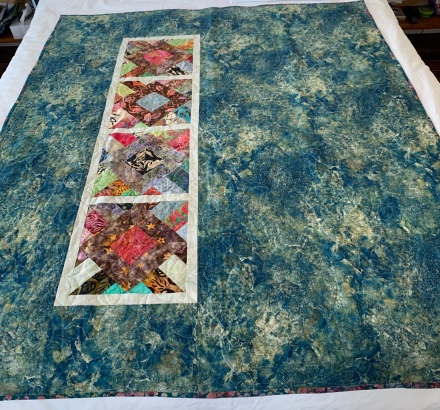 I had four blocks left over which I bordered and inserted into the backing fabric. I was pleased with how the backing echoes the dark teal feel of the quilt top and the inserted rectangle stands out nicely.

People ask “How long does it take to make a quilt like this?” It’s not an easy question to answer particularly since in this case I was working on another quilt, making a gazillion zippered bags and sewing other things.

I started this quilt somewhere around Nov 10 when I started sewing jelly roll strips together, cutting the panels into squares in preparation for the sewing retreat (Nov 14-17) where I assembled the “magic squares” blocks. I got to laying out the squares on Dec 2. On Dec 5, I created the top panel by adding the sashing. On Dec 6, I added the outer border. Sometime during the next several days (while I made more bags, finished knitting a pair of men’s socks, worked on and finished the second “fish” skinny quilt got some baking done), I created the quilt back. I began quilting it a week ago – the quilting took three days finished on Dec 25. Binding the quilt took a morning; I added the label that evening – Dec 26.

So you could say I worked on the quilt for 6-7 weeks, but the actual working time was much less – probably not more than 10-12 days.

And now I’m quilting “Nine Shades Of Grey” which is going quite quickly. My goal is to have this second quilt finished before Dec 31. I think I will make it. 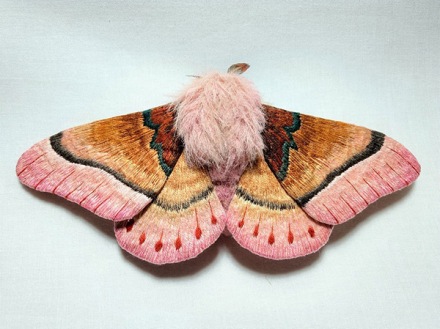 Check out her work – it’s quite wonderful.

Finished with a hidden binding and backing fabric. I like this one even more than the original. I think the ombre fabrics create a feeling of water and notice the single fish swimming against the school…. But that’s it for fish – I have no more in my bag of fusible scraps.

I wasn’t happy with this banner – it wasn’t quite square and it showed when the piece was hanging. Yesterday, I took it apart so I could straighten the sides and while I had the backing and binding off, I decided to remove the smallest blue circle – first, because it was the wrong colour – it didn’t really show up – and second, it was the eighth circle and an odd number is more pleasing. Now the yellow in the top large circle is now echoed in the small one and your eye moves between the two and is then drawn into the complexity of the fabric design of the other circles. A better balance.

Best of all, the banner is now square so it hangs straight and I can include it I the banner/skinny quilt collection.

I thought I was finished with the Christmas bag making – wrong! Yesterday afternoon I distributed the zippered bags to the women in the knitting group (they all loved them) – however instead of the dozen I’d planned for, by last evening I had given away 20!

I reconstructed a list of other people I’d already given bags to – that was another 15, and I still have a further 16 on my list. In spite of the ten small bags I made the other day I was going to be a few bags short and I still want to have some around for ready gifts through the year.

So this morning I got up and started prepping for another twelve bags (finished size 6″ x 8″).

I cut the outside fabric, lining fabric, batting, zipper tape, grosgrain ribbon – that took about an hour. I sat down to production sew the bags which took just over 90 minutes (that’s less than 10 minutes/bag). By 11:30 I had another dozen bags.

And that wasn’t the end. I visited my friend Joan during the afternoon. She’s 88 and not as active as she used to be. I didn’t think she’d find a use for a bag so I didn’t take one. However we discussed them and turns out she could use a small bag to carry a credit card, a bit of cash and a key. When I came home I made her one. I’ll take it over to her tomorrow!

That makes 83 bags I’ve done in the last month and a bit. No more!

Not much to say about these – I can practically make them with my eye’s closed. The size of these bags was determined by the fabric pieces I had – a sample collection of colour ways in graduated sizes I was given at the sewing retreat last month. I was limited by the size of the smallest sample piece. That was when I decided to add a top strip using leftovers from the larger pieces. 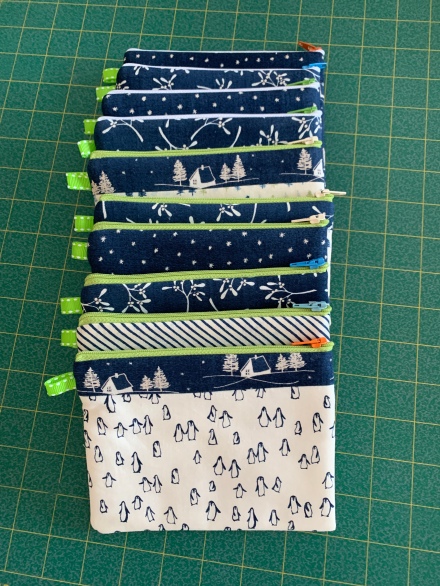 I have now sewn close to 50 this season – that’s it, no more. Ten went to my niece for her to use as gifts.

Twelve are for the women in my knitting group – they get their’s tomorrow.  The others have been disappearing quickly from the stash – which is why I decided to make ten final ones.

I should now have enough zippered bags for this season with a few left over to give away during the year.  The bags don’t need to be wrapped – they are the wrapping and useful besides.

That’s it! No more till next year.

This is the lead photo in an article showing a number of very clever Architecturally-Inspired Self-Portraits by photography duo Daniel Rueda and Anna Devis. 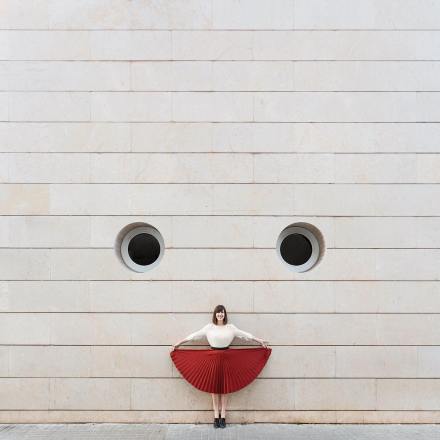 Do take a close look and enjoy the ingenuity these photos represent. They’re very interesting.

I have two quilts to work on but I’m not satisfied with the embroidery design I’ve created to quilt the “Nine Shades Of Grey” quilt and that has me hung up. So instead of quilting Magic Squares Quilt IV, I decided to work on edge stitching Fish 2.

Fish 1 also used these same leftover off-cuts from Quilt-On-The-Go with the “X”s and “O”s  appliquéd to background layer of blue blocks.

Two weeks ago I gave away Fish 1 to a friend to whom I’d promised a wall hanging (Well, really I made “Tropical Flowers” with her in mind, but once I’d spent 2 months thread painting, and then had it hanging in my home for a while, I couldn’t part with it, so Fish 1 went to her, instead.) I know it has found a welcoming home.

After Fish 1 left the house, I missed it. For some reason I felt attached to it. However, I still had quite a few fish in a bag and two lengths of an ombre fabric in turquoise shades, so I decided to make Fish 2.

Same construction as the other Skinny Quilts/Banners – two unequal wide-ish pieces of fabric (cut from width-of-fabric) joined by a 1″ strip of a definitely contrasting fabric, with the appliqués fused then stitched in place.

This afternoon I edge-stitched all the fish, then added rather bright-coloured eyes (which I thought would be an improvement on Fish 1). I even managed to embroider my signature (even if I have it going in the wrong direction – the bottom edge of the signature should be facing the fish – nobody is ever going to notice it – once the embroidery began I knew I wanted it running bottom toward top but it was too late to stop and change it – as with a lot of this embroidery work – you get it right the first time, or you live with it.)

BTW – a better name for this piece is “Against The Crowd” or “Swimming Upstream” – one fish is swimming against the others!

Now I need to set up a hidden binding, add a backing, then hand stitch the binding in place – maybe tomorrow, or the day after.

I got a phone call from my sister Donna not quite two weeks ago – “You don’t happen to have a pair of men’s socks in your stash, do you?” I didn’t. However, I had just started another pair – was at the heel on the first sock so it was no problem making the foot long enough to fit a man’s foot. “What size shoe?” “The same as Ian’s (her husband).” So a man’s size 9 shoe – 60 rows from the end of the heel gusset to toe-off. 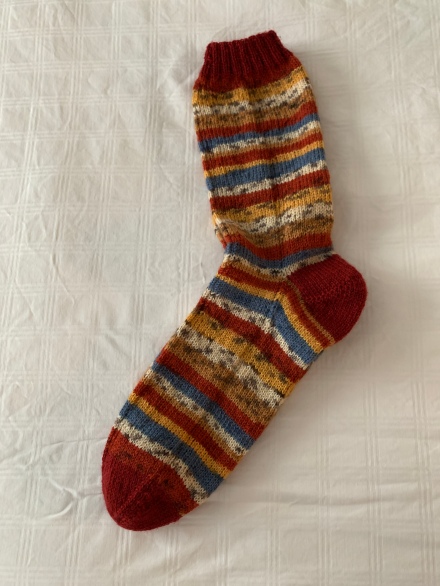 A Pair Of Men’s Socks

And now I’m knitting under pressure.

Donna is going away on the 18th so I have to have the socks done before that. There’s no putting my knitting aside in the evening to do anything else – the socks have to be finished before the 16th which is fast approaching.

Got the second toe completed last night – whew! I’ll deliver the socks tomorrow in time for them to be gifted before Donna leaves town.

That’s a relief and now I am on to more relaxed knitting and sewing and baking and whatever.

I hate working to deadlines – I have little trouble setting them for myself, but when they are external ones it sends my blood pressure up (probably not literally – I haven’t checked, though); I certainly feel the stress. 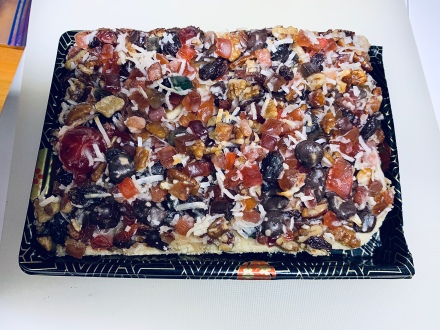 I described in December of 2015 how I make my Christmas Shortbread Bars. I related their history and offered recipe information.

They are a once-a-year-thing, for the Christmas season. I made them again yesterday – the photo above is 1/8 of the large cookie sheet I made. It’s enough for a gift – it can, in turn, be cut into 12 – 16 bite size pieces – more than enough for anyone to taste because these bars are VERY rich.

So if you are interested in how I make them check out that earlier writing – Christmas Shortbread Bars. They’re easy to make, pretty fool-proof. And if you make them once, I guarantee you’ll make them again next year.

The story from yesterday is I thought I had assembled all the ingredients. I made the shortbread and baked it for 15 minutes to set it up. I had the topping ingredients in a bowl ready to be mixed when I discovered I had no condensed milk to glue everything together. So off to the supermarket to get some. While I was there I picked up some of the ingredients I need for the Christmas Sweet Kugel – more about that next week after I make a batch of them. Came home, mixed the topping, spread it over the now-cooled, partially baked shortbread, put the full, heavy cookie sheet back in the 350° oven to bake for another 20ish minutes – until the coconut began turning golden.

You can see, this pastry is forgiving – it turned out fine and the gals in my knitting group today enjoyed it. Now to refrain from eating any more myself!

Top done! I finished the sashing early this afternoon and just this minute finished the border with mitres all done properly the first time! And you can see from the photo that I managed to get the sashing to intersect well – that’s tricky on a quilt like this because all of the block outer edges are on the bias and therefore stretchy. To make sure I’d come close on size I carefully cut all the sashing pieces the same length and then eased the quilt block edges into place. The quilt top is square. 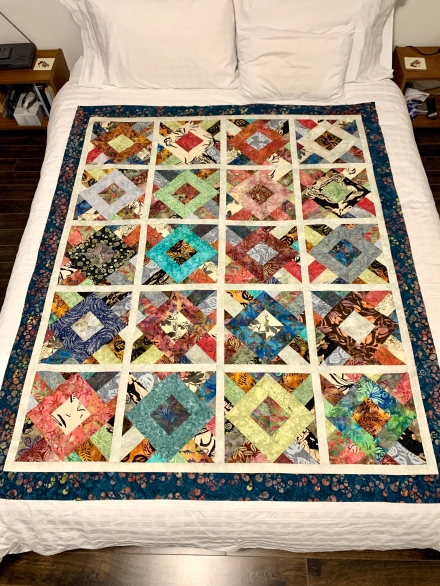 It’s too bad really that I can’t capture the vibrance of the batiks with my iPhone camera – the quilt top is a lot brighter than it looks here. I’m much happier with the final panel than I thought I’d be – the light sashing toned down the 4-strip block corners and the border ties the many colours together, making the panel overall less red/green and more turquoise.

Now I need to construct two quilt backs – one for this quilt (I have lots of leftover half-square triangles with which to work), and another for the grey/gold quilt (and I have leftover blocks there as well).

So marching along with both projects at the same time.