I wanted to construct a quilt using the same techniques that the class participants were using but I wanted to see what the quilt would look like in just two fabrics.

A half a dozen blocks later I could tell I needed some added colour so I inserted coloured centres in three blocks.

The quilt laid out looked like this – not enough colour… 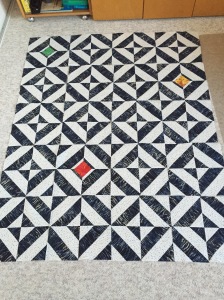 So I added more until I was satisfied with how the coloured flowed within the quilt. 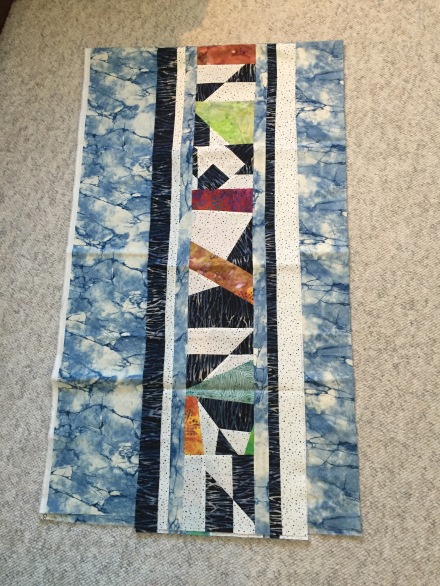 I rolled the backing on one (so it would unroll wrong side up), the batting on a second (so it would unroll right side up), and the top on the third. This allowed me to assemble the quilt on my dining room table! I rolled out a small amount of all three and pinned them together, folded over the pinned part, rolled out a bit more, pinned, folded over until I had the quilt pinned.

So now the quilt is ready to stitch in the ditch and be quilted in the hoop – I’m ready for class which begins in about 15 minutes so I better close up and get moving!

So it started out like this — the heels were worn (in the blue pair the wear extended into the instep). I’ve created a way of replacing heels so that was what I was planning on doing. I picked up stitches around the worn out heels, ran a holding thread through, cut out the worn part a short distance away from the holding thread, then removed the excess knitting until I reached the holding stitches. 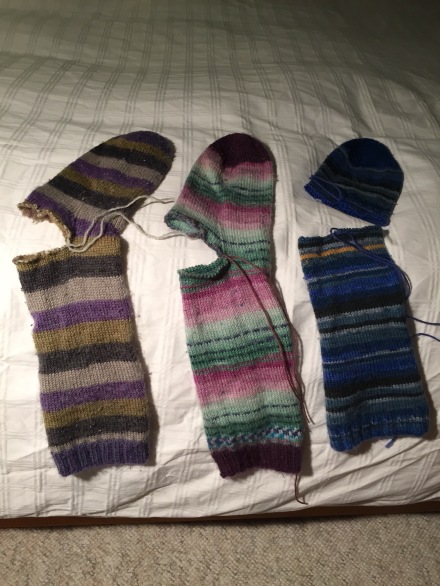 The procedure then involves picking up the stitches at the leg edge of the heel, knitting a regular heel, then grafting back the instep to complete the sock. That worked on two pairs. Shaved the nubbies off the socks and they’re like new.

The blue pair required a bit more extensive surgery! I knit the heel and the gusset and was set to graft back the toe when I discovered the toes and underside of the foot were too threadbare to warrant using. So I continued knitting the entire foot. I scrounged around my leftover yarn but I had no variegated yarn to blend with the leg so I elected to finish the foot in a solid dark grey yarn.

These will now last another couple years of hard wear!

The class came about when I showed Bonnie this jellyroll quilt made from a jellyroll I’d “won” one evening at an event at her shop Sew With Vision. “Good idea for a class she said.” I agreed to do it.

However I had no interest in taking another jellyroll and repeating the quilt for the class so the challenge I set for myself was to create a strip quilt with just two fabrics. I picked out two contrasting fabrics and got to work.

I joined pairs of strips – one light, one dark. Cut triangles (8 from each pair of strips), joined pairs of triangles to make 6″ blocks, trimmed them, assembled large blocks from four small blocks alternating colours at the center of the big block.

I’d made five large blocks when I thought I needed a bit of colour to make the quilt work.

I inserted a colored center into 3 blocks and stopped there. I finished the remaining blocks today and laid them out on the floor:

Not enough colour. So I added a bit more

That’s it. I was going to add sashing but I think any sashing will disrupt the improvisation so I think I will leave well enough alone although I will probably lay out a couple of sashing strips to see how they look.

This is my back deck just after our second snowfall last week. Both snowfalls were wet and heavy but the undisturbed expanse looks lighter. It won’t all melt before our next storm arrives whenever so the snow will continue to accumulate.

Let’s hope I don’t get the accumulation I experienced last winter! 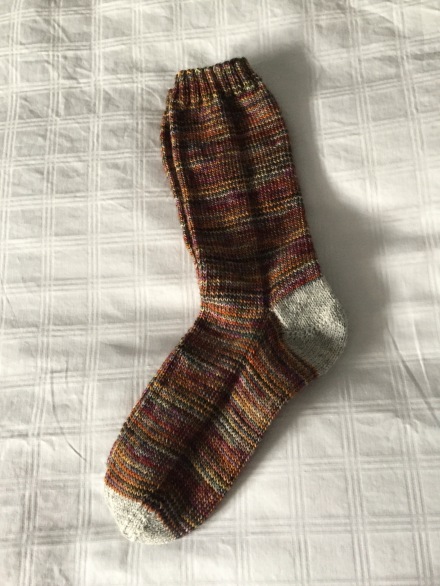 I didn’t buy the yarn in Peru – I received it as a Christmas/Birthday gift. I liked the feel of the skein so decided to use it right away.

It was a lovely yarn to work with – single ply (most sock yarn is a light weight 4-ply), superwash Marino, lightly spun so it stayed together nicely as I was knitting.

The skein had been hand-dyed variegated – no predominant colour but lots of subtle hue changes with something like a 8-10 row repeat. In the photo the socks look somewhat brown but the predominant colour when knit is more golden.

Because the yarn was 100% merino I decided to use a regular sock yarn with 20% polyamide fibre for heels and toes figuring the merino was likely too fragile for these heavy wear areas.

I really enjoyed knitting with the yarn! The socks are now in my sock drawer.

A week ago I was handed three pairs of socks in need of repair. Two pairs need new heels; the third needs new heels and instep.

What you see here are the socks with the damaged parts cut out and a yarn stitch-holder in place. It’s taken a couple of hours to do this prep work. I did two pairs last night; just finished setting up the more damaged pair. I don’t have leftover yarn that matches exactly but I can come close. So now all three pairs are ready for me to begin knitting.

Once the repairs are done the socks will get a good shaving to remove all the pills and they’ll be as good as new. I’m willing to do the repairs – takes a fraction of the time needed to knit a whole pair!

However before I start working on these socks I want to finish the pair I’m currently working on. It’ll be three-four days before I get to these.

Finished last night. In the mail today! Charlie’s 4 years old (almost). Foot length 6 1/2″. His legs are still a bit chunky so I used 52 stitches, 40 rows leg length. Took four evenings to make. He said he liked yellow – I didn’t have much in the way of yellow leftovers. I came was close as I could, augmented with complementary colours.

Now I need a picture with Charlie wearing them! Then I’m expecting an order for two more pairs: one for Noah (nine), one for Mattie (seven) – I’ll need foot lengths, though.

I have two cotton velour housecoats that I’ve had for close to 40 years. I haven’t replaced them because nobody has made much in velour for several years and because I couldn’t find a housecoat with a zipper front! Lots of fleece tie robes, but few that are long and with a front zipper. So I kept washing and rotating the two.

Last week I was in Fabricville – I needed some 9″ zippers to whip up some small zippered bags using the fabric from Peru – when I came across some velour! It’s polyester and stretchy but I though it would make a decent housecoat so I bought enough for two – some in a deep teal, some in a pale teal.

Here are the two finished housecoats! Just finished the pale one today. 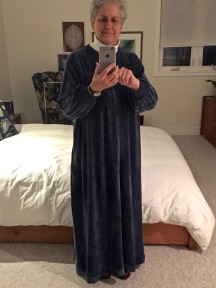 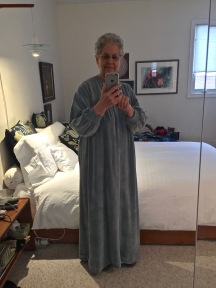 Tricky fabric to work with – hard to keep seams even because of the stretch. The velour is also problematic – can’t press it on the right side! The dark one which I did first had to be recut – I’d got about half way through when I realized the whole garment, but particularly the neck, was too big. I didn’t want to buy more fabric so I actually cut the seams out, downsized the front and back yokes, cut off the zipper and reassembled the pieces.

Inserting side pockets was a challenge — not an easy thing to do using a serger. First I stitched the pocket pieces to fronts and back side seams with a straight stitch, then serged around the pocket, next I serged each side seam (being careful not to catch the front of the pocket in the serged seam.

Hemming the garment was also a challenge – I probably should have used a cover stitch but I didn’t have serger thread anywhere close to the garment colour so I elected to hem using a twin needle. Because the fabric is so stretchy, getting it to feed evenly under the foot took a lot of care (I’d pressed the hem to the desired width before stitching – that helped).

The second housecoat went together much more easily because I knew what I was doing. What I haven’t told you is my “pattern” is a very old Hawaiian muumuu pattern I’ve owned for years.

I’ve made batiste embroidered nightgowns from it but had never adapted it for a heavy garment like these housecoats. Adapting it meant creating a front opening with an invisible zipper. I had no instruction sheet to direct me – I had to figure out a sewing order on my own. Like the front yokes had to be attached to the front skirts, the back yoke to the back skirt, the shoulders stitched together, the ribbed neck band sewn in place before I could tackle the invisible zipper! That’s because the zipper needed to come about half way up the ribbed neck band. I knew all of that when I started the second housecoat – I didn’t know it when I started sewing the first – lots of trial and error with that one. Good thing I’m a patient sewer – I had to take seams apart repeatedly until I got the garment assembled correctly.

The two old housecoats are now in the laundry. Once they’re clean they’re off to Value Village – they still have some life left in them.

I finished the second knit hat a couple of days ago. As you can see, it’s LARGE before its felted. 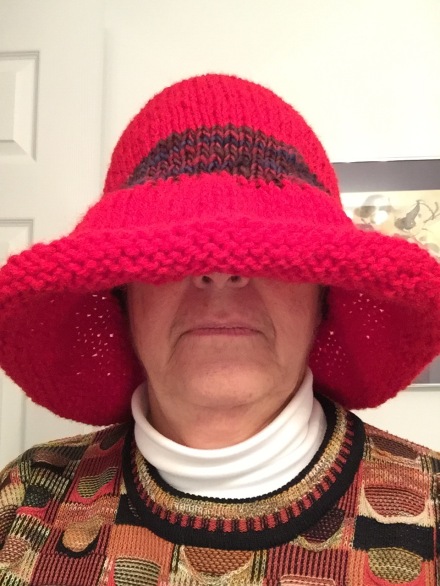 I did the felting last evening – just about 15 minutes in very hot water in the washing machine, agitating it with a drop of detergent. I rinsed the hat by hand and wring it out with a towel.

Filled the crown with crushed newsprint, set the hat over a mixing bowl, then set the inverted bowl over one of the heating vents. The hat was dry this morning.

I used a bit of the yarn from hat #1 for a “band”, mostly because I wasn’t sure I had enough red to complete the hat. I like the contrast! 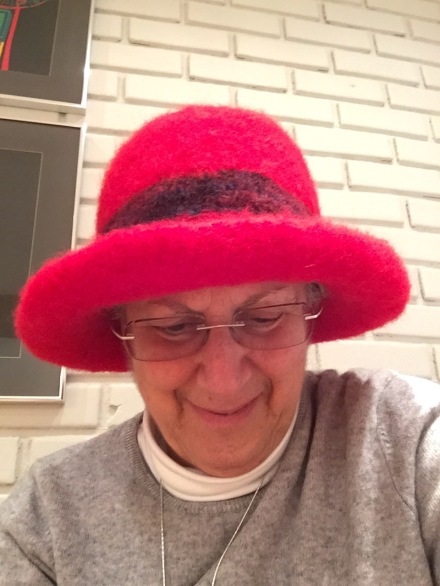 Now to wear it!

Slightly larger than my standard sock – I began with 4 more stitches for the ribbing (72 rather than my usual 68) with a decrease at row 25, and a second decrease at row 45 for a total of 64 stitches at the ankle. The foot is also longer – 62 rows after the gusset instead of the 50 I usually knit for socks for someone wearing size 7 1/2-8 shoes.

I made this pair for a woman friend – I thought about sending them to Charles, Andrea’s husband, although I wasn’t sure he’d wear pink (there isn’t a lot in these socks but there is some). I’ll get them in the mail tomorrow.

I’m now working on a small pair for 4 year-old Charlie (who has a 6 1/2″ foot). Yellow he asked for, so yellow it is. I had some yellow leftover yarn which will get me to the instep and then I will have to improvise from there.

The socks finally arrived and they fit beautifully and Sab loves them!