The dogwoods have been spectacular this year. I never really noticed before how many there are around the city. This one is in my friend Mary Ann’s front yard. I love the hint of pink with the magenta edge. This tree is in a shady spot but it gets sunlight mid-afternoon. Here the sun is both catching some of the flowers directly while others are backlit. Makes for an interesting photo.

This dogwood is in another friend’s backyard. It was in full splendour a week ago.

I’ve driven past a number of glorious pink trees – just not taken the time to stop and grab some photos. Too busy getting somewhere. At least I noticed them.

I noticed the daisies beside the big rock next to our driveway on the weekend but didn’t stop to catch an image. The next couple of days were overcast but when I returned home from my morning Aquafit class the sun was bright and the daisies smiling. I parked the car and got out so I could grab some shots. I cropped several photos but lost the shadows on the rock which contrast with the daisies.

I’ve been taking an online iPhone Photography Course for the past couple of months. I always have my phone/camera with me so I’m making a point of taking some photos every day.

The first lessons had to do with learning about the iPhone camera features – and there are a lot of them. Next, the lessons moved onto to general photography principles – how to establish a focal element, leading lines, balance in the image…. Followed by, editing.

I took the photo above early last week (nearly two weeks ago) on my walk to the neighbourhood high school. The crab apple blooms were just out. I liked the light and shadow on the flowers as well as the texture of the bark. I cropped the original image and strengthened the contrast between sun and shadow but I did little else with the image.

Here’s another shot from the same tree. In this one you can see the dark red colour of the pistil at the centre of the flowers. I took this photo in “portrait” mode which sharpened the foreground and blurred the background. That let me consider some dramatic editing:

Editing with the iPhone provides an amazing array of options, with the Photos app itself as well as any number of photo editing apps. Because I took the photo in “portrait” mode, using the Photos app on the phone, I was able to darken out the background while brightening the foreground to create quite a striking image.

I’ve been having lots of fun exploring with the camera. Not every photo is outstanding, but the iPhone is capable of taking good photos. I’m working at getting better at it. It all takes time, however, what with sewing and knitting, and a bit of house cleaning, grocery shopping. While we’ve been locked down, I’ve had no shortage of interests to occupy me – there’re just aren’t enough hours in the day to get to everything I want to do.

It was actually a lovely snowy day today – snowing quite steadily but almost no wind. A perfect occasion to wear my Manitoba winter gear (which I’ve not parted with) and to take photos.

Our building superintendent was stoically shovelling (and reshovelling) the sidewalk in front of our building for much of the day. I just love his stylish snow-shovelling gear! I walked around him until I was able to see both feet not hidden by the shovel – I tried editing a bit, but in the end all I did was crop the image a little. 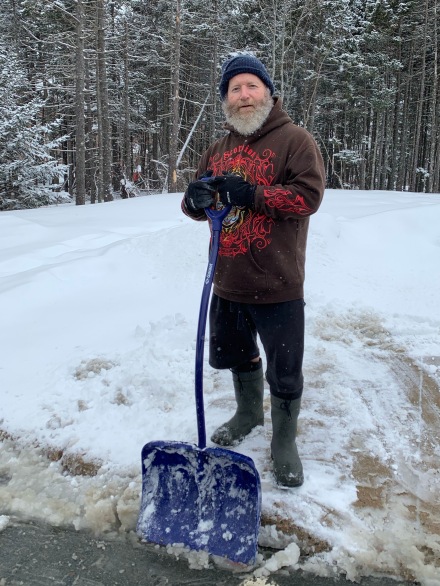 The Epitome Of Snow Shovelling Fashion

On the way back home I had my eye on hydrants as I passed them. This one seemed more sad than the others so I stopped to take it’s picture. Kind of reminds me of a toy soldier with his helmet pulled down around his ears. 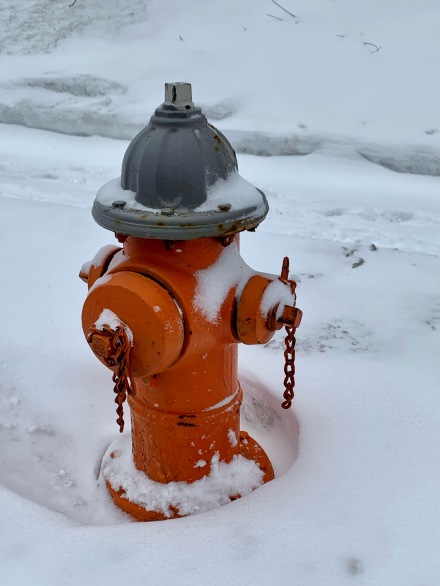 Several months ago I noticed this shelter built from fallen branches in the underbrush. I didn’t think a whole lot about it until today – it certainly wouldn’t afford a homeless person much protection! I wonder what the story is beind this construction….

BTW – It annoys me to hear people complain about the weather – I learned many years ago in Manitoba that if I dressed appropriately for the day I could enjoy every day – rain, shine, snow. When I say I donned my Manitoba gear I mean it:

A warm down parka faced with fur, a good scarf and warm boots and mitts – I’m ready for anything. In fact, I was too warmly dressed today so I unzipped the front of my coat a bit. I was snug at -30° C in Winnipeg mid-winter with this coat.

I’ve been sidetracked! A couple of weeks ago I signed up for an online iPhone photography course. To do the course justice, I have to be taking photos. The folks enrolled in the course around the world are taking terrific photos with their iPhones. I haven’t been out and about much for the last few weeks so I’m kind of limited to what I have here in the apartment.

I’ve been trying close-ups of the orchids and the amaryllis which is blooming again. I’m limited because my iPhone XR has a single camera (I don’t want to use the zoom, for technical reasons) unlike the latest iPhones which have either two or three cameras – one of which magnifies 2X. So I’m limited by how close I can get to my subject and still have the camera focus.

In this photo I was trying to keep the dots in the throat of the flower reasonably sharp. Then I edited the image trying to blur the background a bit and strengthen the veins in the petals and sepals.

I tried the same thing in this photo – not quite as sharp – I’ll have to try again on a brighter day. I was aiming to get the petals to be almost translucent

I was quite happy with this close-up of my amaryllis – I wanted to retain the pale green at the centre; I was also aiming to position the camera so the stamens were in focus. Here, your eye zooms in on the floral centre but then follows the stamens and the lines in the petals outward.

I’ve also tried a couple of portraits – using that mode it’s possible to blur the background in an interesting way. I need to take many more images before I’d say I can control of that function of the camera!

I now can intentionally take bursts of photos, use the “Live” function. On to the next module to learn more about what the iPhone camera will do.

And I have to get back to “At Five Islands” later today!