It’s done. Quilted and bound with a label. A vanishing 9-patch quilt with borders built from ~80 charm squares. 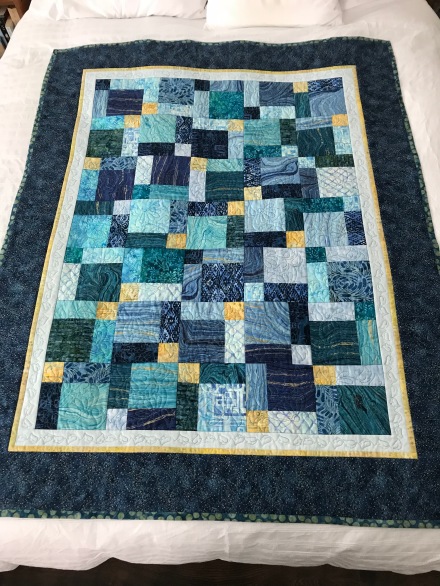 I’m pleased with the scattering of the small yellow blocks – they appeared when the assembled 9-patch block was recut into four – the yellow central block became four small corner squares. The distribution of colour also has worked out well. The pale inner border ties the central pieced panel nicely, the narrow yellow border provides accent and the dark wide outer border balances out the quilt. 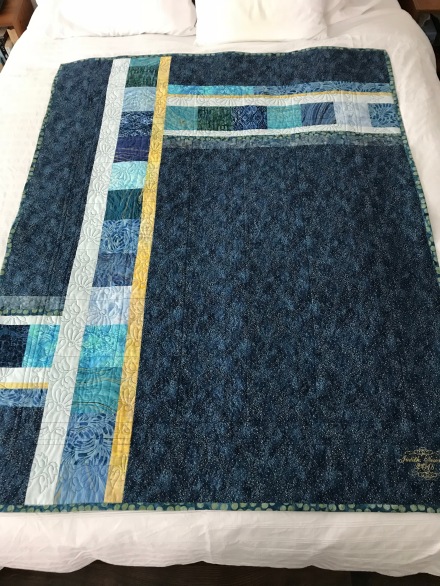 For the back I selected a few squares from the second charm pack I’d bought (in case) and cut an equal number of batik squares to set up the bordered strips. The backing fabric is the same fabric I used for the borders on the front – didn’t have quite enough to cover the top so had to create a horizontal stripe as well. I reversed position of the two pieces when I added in the vertical strips to add further interest to the back.

The quilt is now in the growing collection of quilts to be shown in Parrsboro in July/August. It won’t be for sale since it already has a home with my physiotherapist. I think it fits the bill for her – she didn’t want it so fancy that she felt she couldn’t just throw it on her sofa.