A while back I saw an interesting modern quilt on Pinterest:

I really liked the stark contrast between the two colours and the very modern use of drunkard’s path blocks. I printed the image and put it in my “think about” pile. I had 3m of an interesting red batik I thought would work with this idea but I needed something pale to contrast with it. This is just after everything shut down in mid-March so I went online, found a pale turquoise batik at the Missouri Quilt Company and ordered 2m. That fabric took quite a while to arrive – COVID-19 in action, of course, affecting both warehouse and the postal systems. After finishing the Crossroads Quilt I decided to try this quilt.

I began to deconstruct the image, but discovered this quilt was a 2018 Kauffman quilt pattern so I downloaded it. However, the finished dimensions (a twin size quilt) were larger than I wanted to make so I scaled it by 85% (now that I have the top completed I realize I probably should have scaled it 80%). That meant downsizing all the pieces.

First, I experimented with the size of the drunkard’s path block – taking it from 6 1/2″ down to 5 1/2″ – but I couldn’t go from there until I started assembling some blocks into larger units because I wasn’t sure what size the connecting elements would actually turn out to be. I started by constructing 10 drunkard’s path blocks (I knew I needed 39 in all) and created the first column, added the second column, then the sashing elements between as well as the outside left border.

The next part of the assembly was less straightforward – I constructed the remaining 29 drunkard’s path blocks and began working on the central panel:

I joined the first pair of drunkard’s path blocks with sashing, add the third block to one end, next the side sashing, put the second triplet with it, then add the end sashing…. I only knew what size the sashing elements needed to be by measuring where they fit as the parts of the “block” came together. It was easier figuring out what size fabric pieces to cut as I went along by measuring where they went rather than trying to work out 85% of each piece in the pattern. 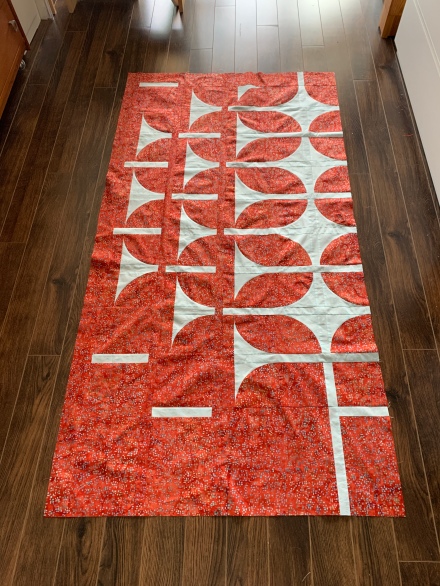 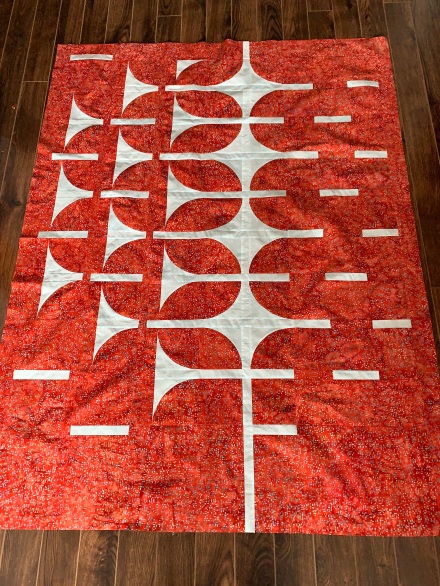 Yesterday, I bought turquoise fabric for the back. I have all 39 pale turquoise “pie” shaped pieces cut from the “L” pieces as I built the drunkard’s path blocks. I plan on creating a dozen or so reverse drunkard’s path blocks using scraps of various red fabrics that more or less blend with this background batik for the “L” pieces so I can set up a strip to insert into the back panel.

That’s where I am right now – I have to cut out a dozen or so drunkard’s path blocks – downsizing the turquoise “pie”shaped pieces, cutting out red blocks for the “L” shaped pieces, creating the blocks and stitching the panel.

So on to that next.

5 thoughts on “A Very Modern Quilt”