Two evenings ago we attended a performance of a “Fire Dance”. The Balinese name for the dance is “Sekaa Kecak”. It’s a dance not accompanied by instruments but by a 100 member male chorus.

It’s an old ritual dance based on an ancient Indian epic. It involves gods and princesses and other important persons in a series of abductions, rescues, deaths… All very convoluted. 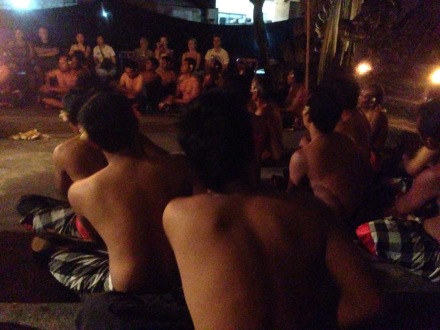 Can’t say I understood much of what went on. The finale involved a rather large bonfire in the midst of the square and a dragon character who dashed through the fire scattering the burning cocoanut husks repeatedly. The performance was in the round so those scattering ashes came very close to the audience! Unfortunately, I didn’t capture any photos of the dragon and the fire – the fire was too bright.