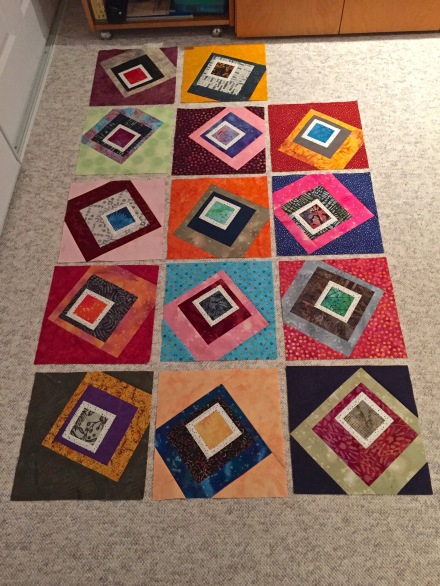 Here’s what I’ve got so far – not necessarily ending up in this orientation and still six blocks to construct for the top. I’m loving how bright this is. Each block has been interesting to make up.

Now that I know what I’m doing, I’ve been able to prep the fabric so I have what I need for the blocks and I’ve tidied up the stacks of fabric (have to put them away tomorrow). Last night I set up each of the blocks – took a backing square (trimmed all of the fabric pieces to 12″), chose two contrast fabrics and a center and put them to one side, until I had all the backing squares set up. So sewing blocks today went much faster because I wasn’t having make all the decisions as I went along.

I’ll get the six blocks for the top finished tomorrow (and perhaps three more to add to the two I have already for the back). I have backing fabric for the quilt which I bought the other day and lots of stuff in the stash for binding.

I still don’t know how I’m going to join the blocks – they need some sashing – the question is whether to sash them symmetrically or to do something wonky with them. I’ll have to ponder that a bit when I have all 20 to play with.