I’m playing with three ideas in this new quilt I began during the week. First, I felt like I wanted to work with yellow and grey. I went through my stash pulling out everything I had in those two shades (quite a lot, actually). Then went shopping for more yellow and one more grey.

Next, I decided to work with half-square triangles. I’d seen a picture of a quilt with the point elements offset into the border. An otherwise simple quilt suddenly became more interesting.

Then, I’d seen another quilt where the colour of the blocks was graduated giving an ombre effect – in this quilt only the greys shift from light to dark, the yellows are of constant value. 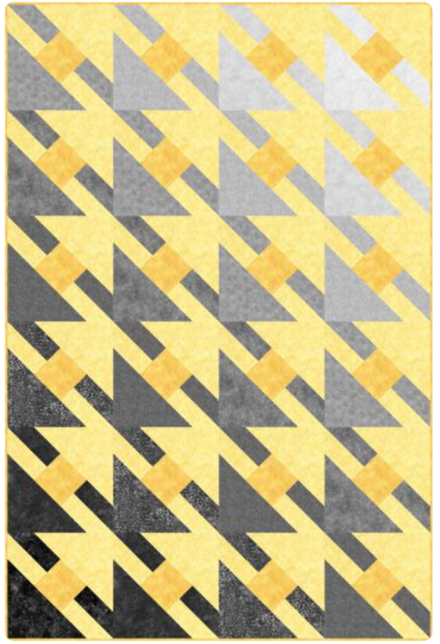 I wanted to shift both colours from light to dark:

The border here will be the dark grey embedding the yellow solidly against a dark background. I can also see from the photo I have to reposition (perhaps even swap out) some of the darker blocks with dots because they pull the eye from the overall movement in the quilt. Another thing I’m wondering is whether I shouldn’t pop a tiny bit of another colour (say a very strong orange) into some location or other – but perhaps if I’m careful repositioning the dots I might get the effect I’m after. I’ll have to play with the layout some more.

Repositioning the darkest blocks with the dots has done it I think… although maybe I should gather the paler oranges together into the second or third ring – that will probably require I make new blocks – anyway, it’s time to get on with other things today. I’ll keep looking at this before stitching the blocks together…