The Canadian Quilters’ Association is holding a Canada-wide quilting bee to commemorate our 150th birthday. The women in my building got together yesterday and we made blocks/slabs to contribute to the more than 1000 quilts the association hopes to donate to Ronald McDonald Houses across the country.

Most of the women dug through scraps of fabric, assembling strips and pieces to sew into 12 1/2″ blocks (each block to contain a small piece of “Canada cloth” containing maple leaves) – I was one of the sewers. I must have stitched at least 15 blocks. In all, we assembled 50 blocks – enough for two 4×6 tops, or four 3×4 tops which is what the Association will be making at the “Big Quilt Bee” to be held in Toronto June 14-17. During the four days volunteers will be assembling thousands of individual quilt blocks into quilt tops and making them into quilts.

As we were leaving Avis handed me one more batch of pieces. I made the block this morning: 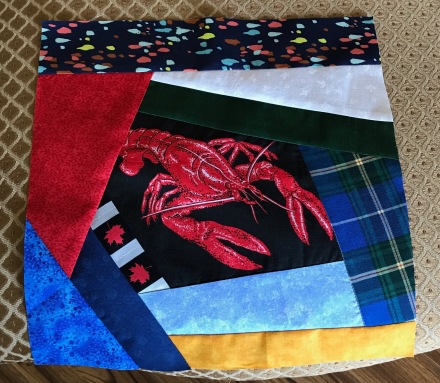 My lobster block has the requisite maple leaves, along with some Nova Scotia tartan and colours representing the forests, sea, sun and sky of Nova Scotia. I completed the block with a multi-coloured scrap. I hope it tickles the fancy of some recovering child.

OK, so I was wrong. Last year the coltsfoot didn’t appear, at least I didn’t see any, until April 27. On the way back from Peggy’s Cove, I saw a small stretch of coltsfoot along the highway. Must have been a spot sheltered from the wind and the ground had warmed enough to encourage the growth. 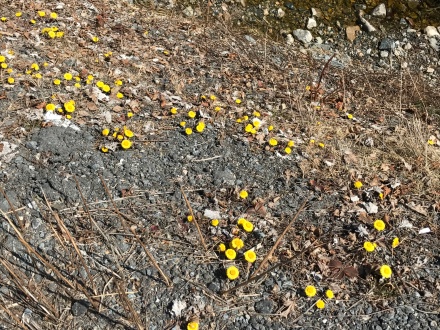 I saw a lone coltsfoot flower near the fence in my former neighbour’s back yard area this afternoon.

The crocuses I planted 20 years ago were peeking through the dead hosta debris – also much earlier than last year. 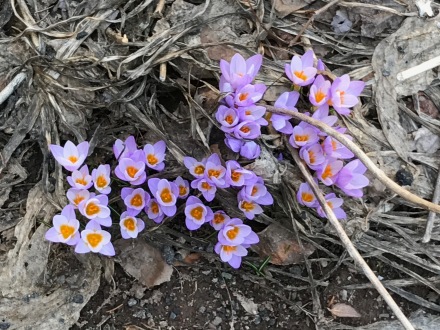 So I guess you could say it’s spring in Nova Scotia after all.

Went to Peggy’s Cove a couple of days ago with a friend visiting from BC. It’s been a while since I’ve been there and couldn’t get over how built up the Prospect Road to the cove has become. 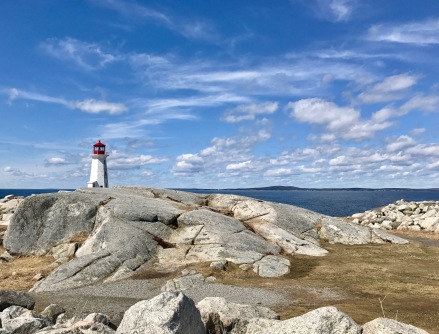 We ventured out onto the rocks. It was a calm day, but we were still cautious and stayed back from the edge – the ocean there is very unpredictable and hazardous so although it appeared calm large waves can arrive unexpectedly.

Couldn’t resist taking another classic photo of the lighthouse – what you see on the horizon is the St.Margaret’s Bay shore along the Aspotogan Peninsula. 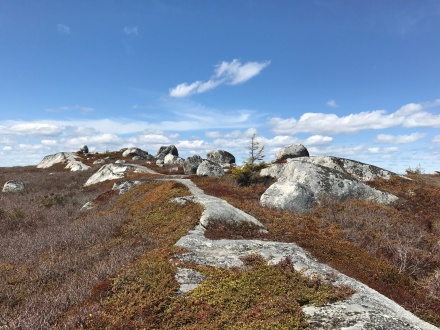 The Terrain Around Peggy’s

The terrain around Peggy’s Cove is abruptly different as you approach the cove. The land here was scoured bare by glaciers and granite erratics are everywhere left by the receding ice. All that manages to grow here, even after 12,000 years, are creeping and low bush shrubs. 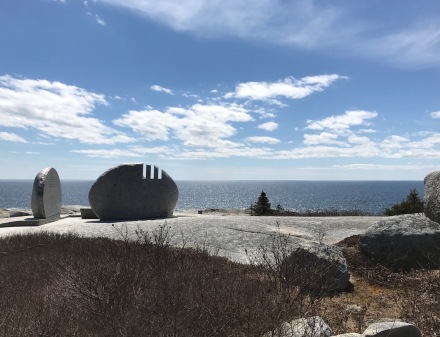 One half of the Swiss Air Flight 111 Memorial is located just outside of the cove. The second half is located in Bayswater on the other side of the bay. The sighting lines cut into the standing rock on each site triangulates the actual point of the crash. The site is peaceful and yet disturbing. I feel it every time I stop there and look through the cuts in the rock. 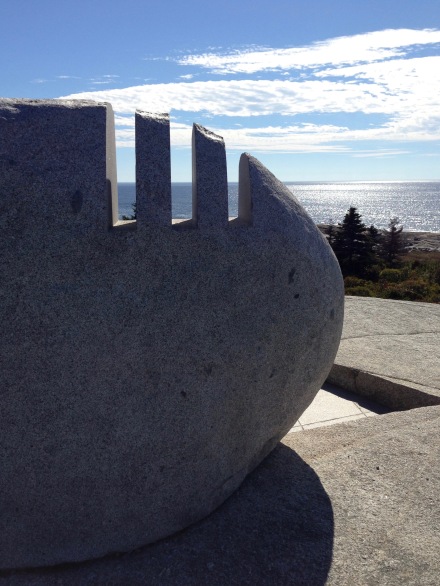 Signting The Precise Location Of The Crash

The point on the horizon visible through the cuts is the actual location of the crash. It’s impossible not to think about the victims of the disaster when you’re standing there.

It really was a lovely day. The tourist season hasn’t yet begun so there were very few people around. We shared a lobster roll for lunch at the Sou’wester – noticed a woman nearby enjoying the classic gingerbread with ice-cream.