Right now the countryside of Tuscany and Umbria is ablaze with poppies – not planted but growing wild everywhere. This morning we had a chance to make a brief stop to photograph them.

They glow in the morning sunlight – whole fields of them. I have no idea how long they last or whether they’re harvested or not but they sure are lovely. 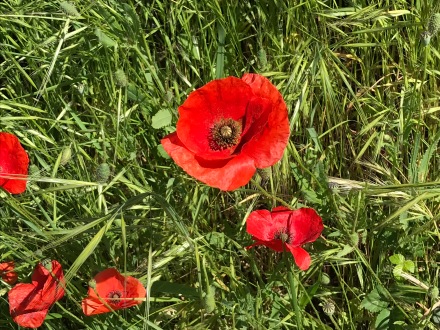 We saw the poppies on our way through windy mountain roads to Cortona, nearby in Tuscany. Cortona is situated part way up a steep slope, a tiring city to get around because except for one rather flat street, the streets need serious climbing.

Cortona – A Side Street

Our first stop was Il Pozzo – owned by Ivan (never got his last name) a wonderful Italian charmer. He’s an historian, an archeologist, an art aficionado. The shop has a superb collection of art, photographs, old maps, hand made paper.

Ivan gave us the history of the building – it’s foundation is Etruscan, then medieval building sits on top, followed by more recent construction on top of that. When he bought the building 18 years ago he had no idea what he would uncover as he began clearing away the accumulated debris.

At the center of the main floor is an old Etruscan well! 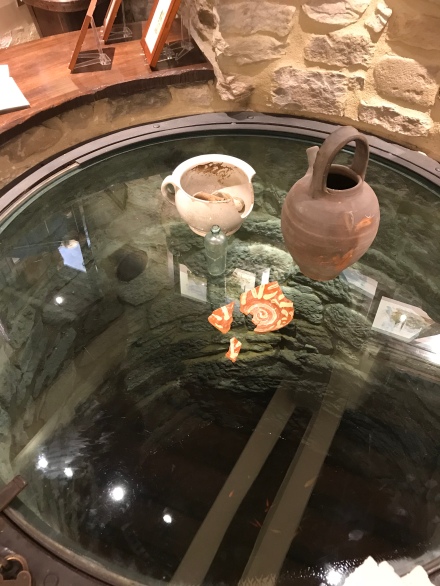 Looking Into The Well

The well is about 10-12 feet deep – a water depth of 5-6 feet, the surface 5-6 feet below the glass covered opening. The well had been used as a dump for centuries and in excavating the mud Ivan came across artifacts originating from Roman times, as well as bits of medieval pottery. Currently he keeps carp in the water which sits atop many feet of unexcavated debris.

Following the history lesson, Ivan provided us with Antipasti that were out of this world – he’d prepared three hot dishes to spoon on top of some fresh focaccia:

Following our visit to Il Fozzo, we climbed a street from the Piazza to have lunch in a nearby restaurant. Another delicious meal.

I ordered what I thought would be a small antipasto, this is what arrived, all delectable. I managed to eat about a third of the offering. What we’re disovering is just how much Italians eat.

We finished lunch at about 2:30. We then drove uphill to the Sanctuario Di Santa Margherita – a large church on the outskirts of Cortona. The inside of the cathedral was lavish and the views of the surrounding countryside spectacular. On our way home we made a brief stop at a monastery nestled in a corner of a large olive grove – one of the last stopping places of St. Francis of Assisi, the rather large well kept buildings now house just 5 Franciscan monks.

I slept most of the way home – it’s all that food midday that does me in. We’ve just finished a light dinner of sautéed chicken breast with salad. It’s now time to call it a day. Another adventure tomorrow.