Funny what calls out to you when you sit down to work. The small triangular cut-offs from the Nine Shades Of Grey quilt said “Play with me” – so I did. I began by sewing them together into half-square triangles, then laying them out in blocks, formed rows, and stitched the rows together. I was trying to mix up the colours so they weren’t adjacent (and I was pretty successful doing that). I ended up with an 8 X 10 array with a bordered square on point in the centre. My piecing isn’t perfect but it’s close enough to live with as it is. 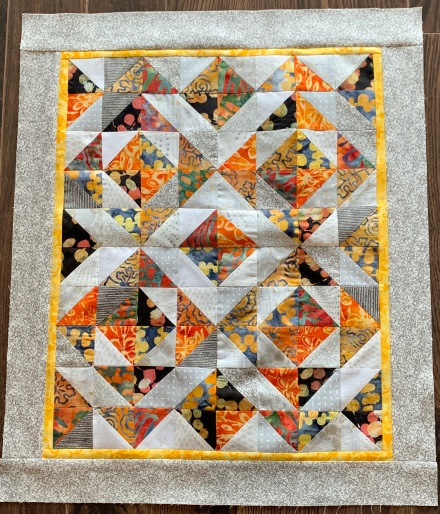 Once I had the small half-square triangles sewn into a panel, I decided to enclose it with a narrow border rather then a wider one. Had I been doing a wall panel, I’d have used the golden fabric as a piping, but I thought for a quilt it probably needed to be a narrow strip of accent fabric. And then the medium mottled grey seemed to settle the whole panel down – it’s strong enough to stand out and yet sets up the yellow which brings out the golden shades in the batiks.

I have no idea where to go next! Medallion quilts are usually square, but for a comfortable throw/lap quilt it wants to be longer than wider so I went for a rectangular panel. I will see if it’s possible to increase the length with perhaps two insert rows in top and bottom edges as I build the quilt borders out.

Time to look at Medallion quilts and see what inspiration I can find for taking this quilt further. I think I want to keep the “Nine Shades Of Grey” idea going in this project which means whatever I do next should use the grey fabrics extensively with perhaps just hints of the bright batiks – who knows….