I’ve just spent the morning working on the distant background – the NS mainland in the far distance, the islands closer to the Parrsboro shore and the nearby headland. Then I started on the mud flats – it’s fiddly and the bits of fabric may be too large but I won’t know that until I get the foreground developed. I can always remove some of the bits of brown and fill in with thread-painting. 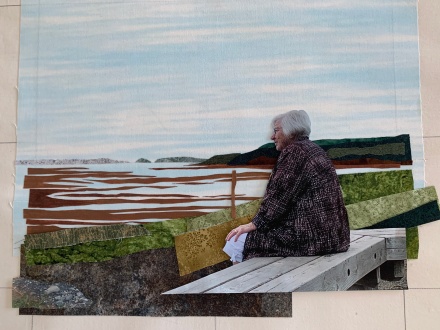 Looking at the photo, Ruby might be just a bit too close to the centre – I may want to position her a smidgen closer to the right edge. But now I’ve got the layout positioned so that her head is above the headland. I also like how the sky has turned out – it’s a piece of fabric I purchased quite a while ago. I will add in some more grey clouds on the right, probably using some organza, but this will thread-paint nicely.

Gotta go do other things now. Back at this tomorrow.

4 thoughts on “At Five Islands II”