After finishing  Asparagus Field in late September, I started a second art quilt: I had photos of my two oldest great-nephews taken a number of years ago when they were 4 1/2 and 6 on a visit to the Public Gardens (in Halifax) – I decided to combine two photos into a single image so both boys would be in the work. I enlarged the photos using Photoshop and printed out sections from which to assemble the piece which I wanted to be ~15″ X 23″. 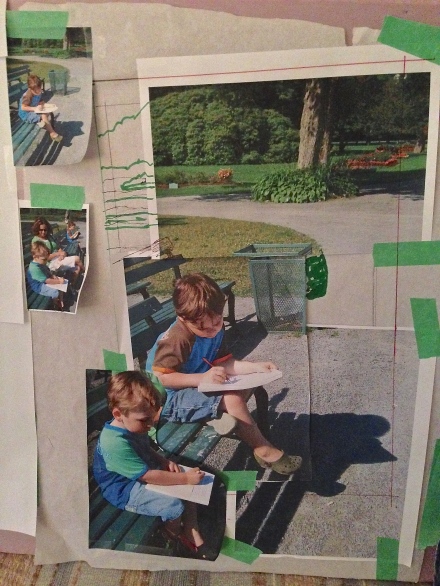 I began by setting up the “quilt sandwich” – a grey stonehenge fabric for the gravel path (which I used to cover the entire piece), batting and heavy fusible stabilizer on the bottom. I marked out the finished dimensions, stitched the sandwich together and didn’t get much further than that – the stumbling block was the boys’ hair – it’s the highlight of the piece and I had NO idea how I was going to create it. I played unsuccessfully with yarns of various kinds. In the end I decided to try machine embroidery thread laid on a sticky stabilizer, then stitched into place. It kind of works – I’ve done half-a dozen trials but I’m not quite satisfied — that stopped me doing anything else.

At the beginning of the week, with my shirts all done and no new quilt started, I thought – it’s time to get back to this art piece. So I dug out the box of fabrics and got to work. I added a strip of dark fabric to the top edge, below that I used a bright green for grass, then started creating “shapes” for the rhododendron bushes and threes and the large tree closer to the boys.

The image gets built up from top to bottom, from background to foreground. I added in bits of coloured fabric for the flower beds. Next some shadows for the bench, the trees outside of the scene on the left side, under the big tree at the top.

At this stage, the boys are still the paper cutouts with the “hair” pinned on. Not happy with that hair! 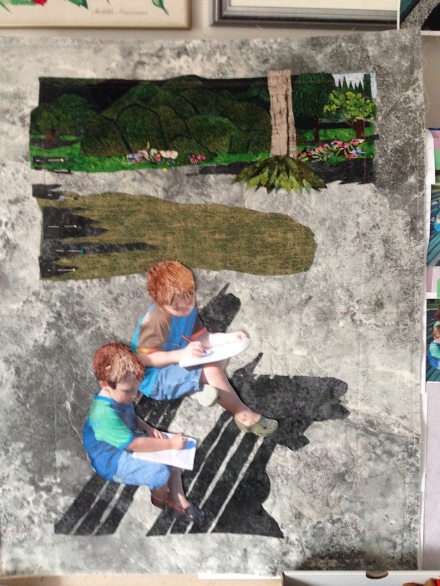 Next the grass gets extended and stitched, the gravel gets filled in with free-motion stitching, then comes the benches – just fused in place at this point (the boys are still those paper cutouts pinned in place). 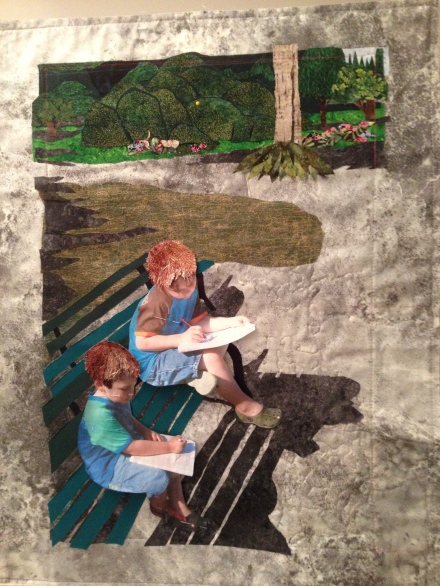 Three days into the project and here’s what I have: 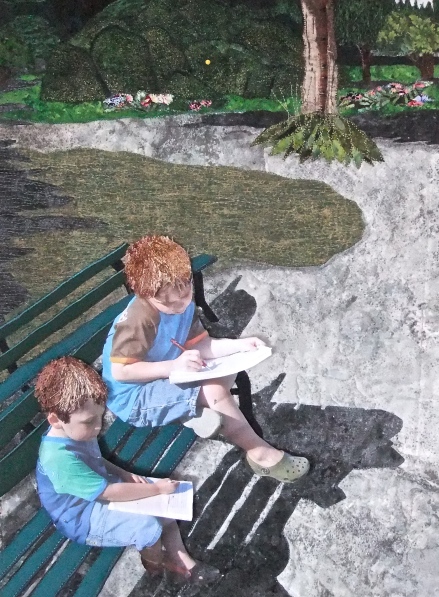 The elements of the background are all in place: the shadows, the benches, the grass patch behind and above the benches, the tree with a hosta patch around it, one of the large rhododendrons in the Gardens, two small flower beds, and some trees in the background. I have stitched them all in place – I need to do much more thread painting: the hosta could use some more leaves and flower stalks, and the rhododendron still needs a lot more stitching using a lighter green thread (I’ll probably use a variegated to give some variation to the texture of the shrub).

So far, the boys are still in paper (with the latest attempts for hair pinned on). I’ve carefully traced all the elements needed to construct the boys, figured out an order in which to assemble them, I’ve prepared fabric swatches with double sided fusible interfacing – so tomorrow I’ll start constructing the boys – the bodies and clothing are straightforward – it’s the faces and hair that are still challenging me! I thought I might try setting up a portrait embroidery but my software isn’t sophisticated enough to produce a decent rendering of the faces – so I’ll use a combination of oil pastels and permanent marker to hint at the facial features. The hair – still not sure how I’m going to accomplish that but something will work out, I’m sure.

So all that’s left is to create the boys, and do more thread painting before I add the boys to the background. Oh yes, and last – add my signature with a date!