Finally done. I’ve been working on this quilt for a couple of weeks now. It started out as an unequal 4-patch based on an idea for a charm pack (5 X 5 squares). I used the fabrics I bought at the Kaffe Fassett lecture in the spring.

I cut and sewed the 4-patch blocks but they were too small for a 5 x 7 quilt – I needed to add fabric so I added another layer on the edge. BUT I cut the strips too narrow – the blocks were still too small for the final dimensions I was after. So I decided, rather than just add sashing, to add triangles around each block which resulted in a “tilted” block. Seventeen blocks tilt in one direction, eighteen tilt in the other. So I had to lay out the blocks in the order I wanted them and add the correct triangles to each so that the layout I was after would be in the finished quilt top. Finally I added a 3″ border around the outside. The finished lap quilt will be 48″ x 65″. 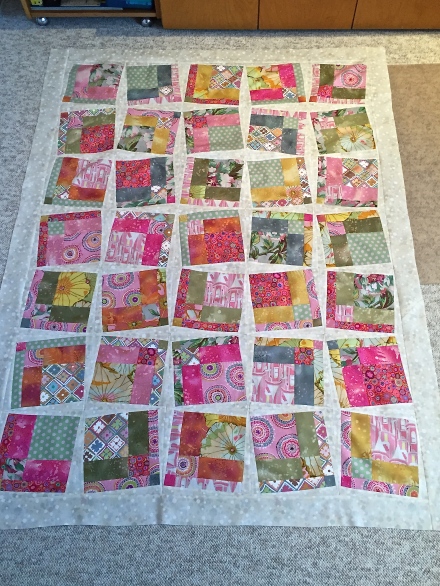 I worked out the triangles by trial and error – I wanted the tilted block to end up 8.5″ wide – in the end that meant I needed a triangle cut on the diagonal of a 2 1/4″ x 9 3/5″ rectangle. Applying the triangles is tricky – can’t chain the sewing – each block has to be done individually – the first strip is partially sewn on, then the other three sides are added, and then the first side is stitched to the end – that’s necessary to get all the triangles sewn in place equally. In the end, it wasn’t applying the triangles that was difficult, it was sewing the blocks together – I didn’t quite manage to get all the points to align perfectly. But once the top is stitched in the ditch and quilted that isn’t going to show – only a very experienced quilter is going to notice that detail!

These are the blocks before triangles (just the block in the upper left has triangles added). 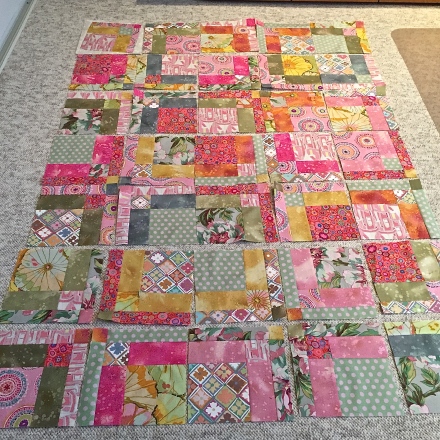