Take knitting – I can’t leave the needles idle – finish one pair of socks, I have to start the next.

It’s become the same with quilting. One quilt finished, the next starts.

Here’s the one I’ve just begun: 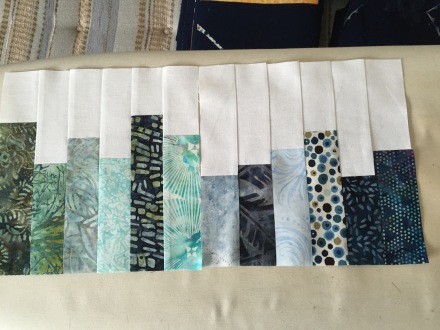 I had a  jelly roll of forty 2.5″ strips of batik fabrics in shades of blue / turquoise, I went to the stash to pick out some complementary fabrics in the same hues as well as some greens that would blend – from these I cut 2″ strips from the width of fabric.

Why 2″? Well, my idea was to build blocks from six strips of batik with a complementary background – I auditioned several solid colours, decided white created the liveliest contrast.

For a lap quilt I want a finished width of about 45″ – six standard 2.5″ strips would give me 12″ blocks (too large for my purposes). I wanted to end up with a 5 block X 7 block quilt so I needed blocks no larger than 9″. Six 2″ strips result in a 9″ finished block. So I trimmed the jelly roll strips to 2″, cut a bunch of 2″ white strips and started improvising.

10 blocks  done – first I arranged them in rows with all the stripes in the same direction, but tried flipping a couple.

Then I took a photo from the end on:

Now that’s an interesting idea!  Still a 5X7 quilt but with the columns having horizontal stripes and now maybe a contrasting vertical sashing.

One thought on “New Quilt”