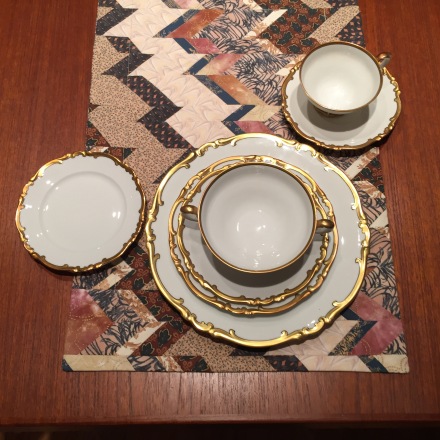 These are my mother’s fine china dishes. She passed them on to me in 1993 when I moved to Winnipeg. I used them reasonably often while I was there, but since returning to Halifax in 1997 they’ve been used only infrequently – I just don’t do the kind of entertaining that would warrant tableware as elegant as this.

I’ve just sent this picture to my niece asking if she’d be interested for sentimental reasons in having her grandmother’s dishes – she doesn’t, I know, particularly like the china she got when she was married.

If she declines the offer, and I’m expecting she will, I may just put them in my kitchen and use them for everyday dishes and wash them in the dishwasher.

Nobody really wants fine tableware like this these days. There is little point in having the set stored in my buffet unused. So if the gold edges wear off in the dishwasher, or pieces break, what does it matter – it’s just “stuff”.

Then the question is what to do with my reliable, unbreakable Midwinter white stoneware dishes which I’ve used faithfully for 35 years! More stuff I have to decide what to do with!

George Carlin had it right in his hilarious monologue about “Stuff”. Never seen it, don’t know it – watch it! We all have too much STUFF!

Finally finished this pair of socks made from two different variegated yarns. I could have bought two 50g balls of either, but wanted to see what I could do by interleaving the two.

The two variegated yarns were based on blue – one more strongly patterned, the second subdued. Unlike the previous pair where I alternated rows of each yarn, this time I knit 10-15 rows changing yarn when I thought the colours would blend. My problem was because I couldn’t discern the repeating pattern in either yarn it was impossible to duplicate the starting place on the second sock – so the two socks, while related, are different.

Nobody will notice when they’re being worn! So into the gift pile they’ve gone – I know a couple of wearers who will smile when they put them on.