I spent the afternoon finishing the Fibonacci Quilt. Last evening as I was nearing the end I was thinking about the binding – my first inclination was to bind it using the solid Kona dark blue but decided that wouldn’t add anything of interest to the quilt. I dug out what was left of the original fabrics, realized I had more than enough to cut two 2 1/2″ width-of-fabric strips from each. My idea was to extend the triangular corners into the binding, carrying the diagonal lines past the border. It took quite a bit of pinning and fitting to align those diagonals but in the end they worked – the most obvious of the matches is the yellow diagonal on the right, but they’re all done that way.

This could be considered a “medallion” quilt – the center block element (in this instance offset as a diamond) is constructed from the Fibonacci series of fabric strips, surrounded by large triangular panels of the individual fabrics, set off within a narrow navy sashing and finished with a contrasting border! 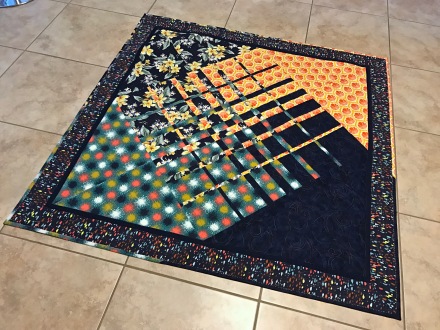 I edge-to-edge quilted the inner panel – I had worked out the dimensions of the embroidery to fit within the navy sashing. My calculations were close enough that eight rows filled the panel end to end without having to fudge the spacing between rows. It’d hard to tell from the quilting detail below that the rows actually overlap – that is, there were spaces in each row filled by elements in the next row. This is usually how long arm quilting designs are created – rows of nested scrolls. It’s much more difficult to plan out when I’m quilting in the hoop on my embroidery machine because while I’m quilting in rows, each row consists in this case of 4 1/2 repeats each of which has to be precisely connected to the adjacent stitch out for the rows to work! The inner sashing was stitched in the ditch; the outer border was quilted using a modified version of the main quilting motif.

This is the most intricate quilting I’ve attempted and it worked out very well. The new embroidery machine and the larger sewing table definitely helped. It was also nice to be able to do the hooping of the fabric on the cutting table rather than on my knees on the floor! 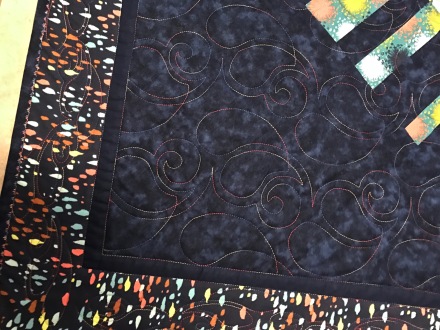 For the back I used leftover scraps from the original fabrics assembled randomly in a crazy quilt array. The block is quite large pieced into the backing fabric. 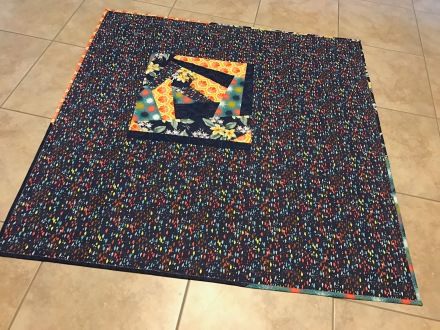 I’ve named this quilt Fibonacci #1. There are, in fact, many different ways of using this number series to construct a quilt. I have to let the ideas percolate for now but there will be more quilts based on the number series…