A while back I purchased and downloaded a quilting book by Louisa L. Smith: “Double Vision Quilts“. She makes interesting quilts by “layering” – using raw edge appliqué on structured pieced backgrounds to create an illusion of shapes such as curves without having to do curved piecing which is an advanced sewing skill!

Her quilts are all quite lovely – beautiful colours, interesting ideas. The one that caught my eye was a quilt she calls “Circular Anomaly” – the quilt has a pieced under layer which shades from black to white (bottom to top and from left to right). The top appliqué layer uses dark red to a golden orange from top to bottom – starting with “X” shaped pieces at the top in dark red on the light under colours to the golden orange on the darkest colours beneath. The finished quilt is intended, I’m guessing by its size, to be a wall hanging.

I liked the idea but wanted to make a full sized lap quilt so I increased the number of background blocks as well as the block size – my finished panel ended up at 41″ X “54” – which means I will also want to add a border of some sort to make the quilt 47″ X 60″.

I considered other colour combinations: blues for the background with green appliqué elements or green background with purple-blue appliqué, but in the end I decided I really liked the colour combination Smith used so to start the project I scoured my fabric stash (scraps, largish pieces, fat quarters, other quilting fabrics) pulling out all the black-grey-whites I had. There were quite a few although not quite enough for the  under panel so I bought 6 more 1/4m fabric pieces in greys. I had a lot of reds – from very dark to golden orange; I’ve gone with what I have: 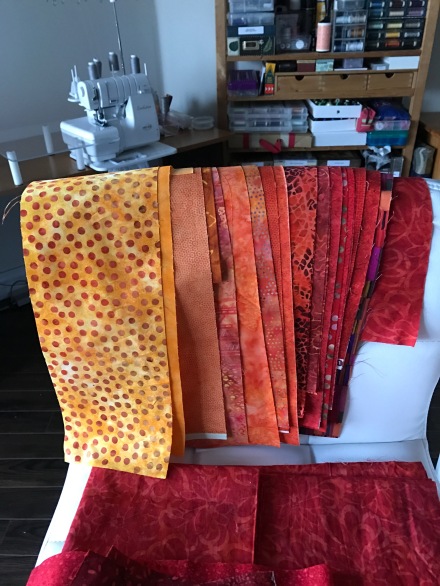 I cut out one hundred twenty (I needed 108 but wanted to have extras so I could control the colour flow) 5″ squares from the black-grey-white fabrics and assembled the 9 x 12 base layer:

Next I had to figure out what size “X” and “circle” elements I’d need and how many (I’m not following Smith’s directions, right? So I had to calculate this for myself). I began with Smith’s templates but upsized them by screen-capturing the two elements, then printing them at 115% which, in the end, gave me the size I was after.

I decided a finished circle of 4″ would work; the “X” ended up with a 2.5″ arm length from the center to allow a bit of overlap.

I cut 4 1/2″ strips of “Wonder Under” – Pellon’s 805 light weight fusible paper backed iron-on adhesive, drew the circles and “X”s on the paper side of the strips, then fused the strips to the back of the red fabrics. So far, I have carefully cut out the “X”s and pinned them to the background being careful with the colour gradient from dark in the right top corner to medium red along the diagonal :

Next step: carefully fuse the X-shaped pieces to the background before creating and cutting out the circles. I’m aiming for asymmetry here, so there will be more circles than “X” pieces. Once all the pieces are fused in place I will need to edge stitch them to the background. To do that I’m intending to cut my batting and apply and pin it beneath the background to bypass the interfacing step. The batting will provide enough stability (the cotton sticks to it nicely) that I should be able to control the stitching process. I’m planning to use a small blanket stitch rather than satin stitch which I think will be heavier than I want (Smith did use a satin stitch in her quilt).

Once the top stitching is done, have to think about some kind of quilting to hold the top-batting-backing together. The design does call out for some kind of stitching within the circles and the “X” pieces rather than an all-over quilting design but I haven’t yet figured out how to do that – I want to try hooping the quilt as 9″ blocks (4 background squares at a time) and embroider within the circles and “X”s. I will have to see what single-run design I can come up with to fill the positive and negative spaces in an interesting way.

More later as I progress further.