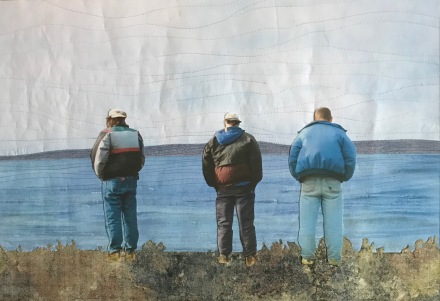 Here’s the question – I’ve been looking at the art piece and wondering how might it look if I printed the figures on fabric, fussy cut them and fused them to the scene instead of trying to create them (shadows and all) from different fabrics? 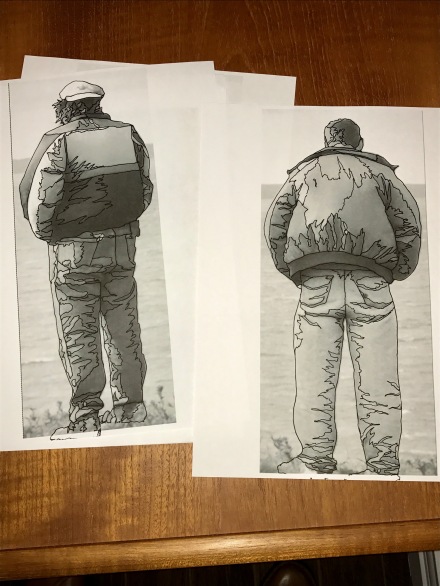 Here’s the detail, right? Lots of little pieces to be very fussy cut and fused to a base fabric – very time consuming. Doing the appliqué work will also be time consuming because I will want to stitch in all those colour demarcations, but what I get is a more realistic look to the figures which are the focus of the piece.

All I’ve done so far is print each pilot on EQ Printables Fusible Fabric and carefully cut each. I haven’t yet fused them to the background. The way we see the sun on their clothing gives the viewer a sense of the light – some brightness but not full sunshine. I can’t achieve that through piecing, even if I’m extremely careful with fabric selection.

I guess what I have to do is try one of the guys and see how he turns out – maybe Brian (the one on the left). Whichever way I do this, I think it makes sense to refrain from filling in the grasses/shrubs until after I’ve got the figures in place, that way I can build up the grass around their shoes as I go along and not as an afterthought.

In case you hadn’t noticed – this fabric wall art requires a gazillion decisions and unlike oil/acrylic painting there’s no going back – you have to live with whatever decision you choose to execute.

Yesterday I worked on the water of the bay. I wanted to suggest the white caps but not to cover the entire surface. I played around with stitches on my sewing machine – several provided possibilities. My machine allows me to modify and create actual stitches so that’s what I did. I tried a couple; in the end I modified the “grass” stitch – I made it narrower and removed several stitches from the single repeat to give me a short burst. 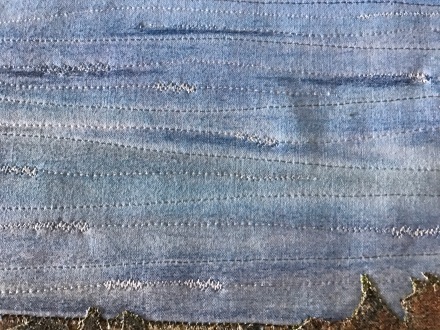 Then I used Neocolori Wax Pastels to hint at the roughness of the sea. 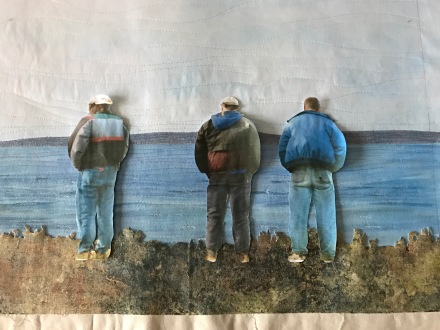 It’s all about experimenting with the stitching before actually attempting it on the piece itself. I have just one chance at “getting it right”. Once I start stitching I have to continue, can’t take it out because the needle marks will show, so I try out different threads and stitch settings before actually working on the piece. 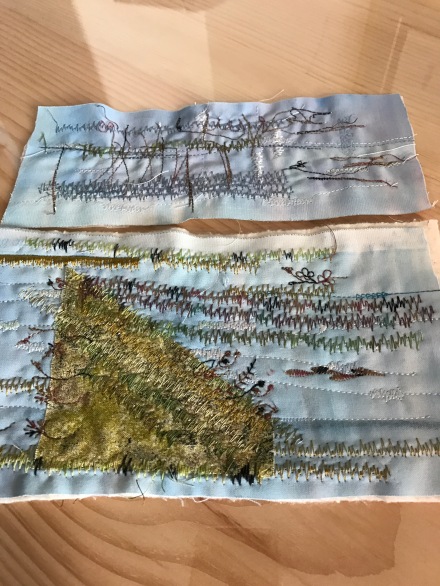 Looks a mess, but in my head I can see the effect of each experiment. Underneath are my tests for the water; on top I’m working on the grassy foreground – I need two effects: first, I need to imply the texture and height of the grasses and small shrubs on the bank – that will take the form of rows of horizontal stitching using three or four different variegated threads; second, I want to create a rough edge against the water – the pilots aren’t on the edge of the sandy beach (the landing zone below), they’re at the edge of the bank 89-100 ft. above the water (the launch zone). The edge of the bank, therefore, should show some grasses and twigs against the sea.

Last night I spent a couple of hours modifying some built-in stitches that will hint at that texture. (Once the pilots are constructed and appliquéd in place I will add grasses to cover their shoes because the vegetation at the edge of the bank wasn’t mowed.

So now I have to take a deep breath and start in. This is it!