You’d think because this piece has borders and piping that I’ve done all the thread painting – wrong! I started adding borders on the weekend because I was having the second session for the thread painting workshop and I needed to be able to show the gals how I finish a piece. I’d carefully marked (using a heat removable Frixion pen) a centre vertical line, used that to set up the inner border line. I kept all the markings visible as I partially bordered the piece. (Here are instructions for how I do borders with piping: creating borders). I marked locations and created a signature to show how I position the signature embroidery, as well. 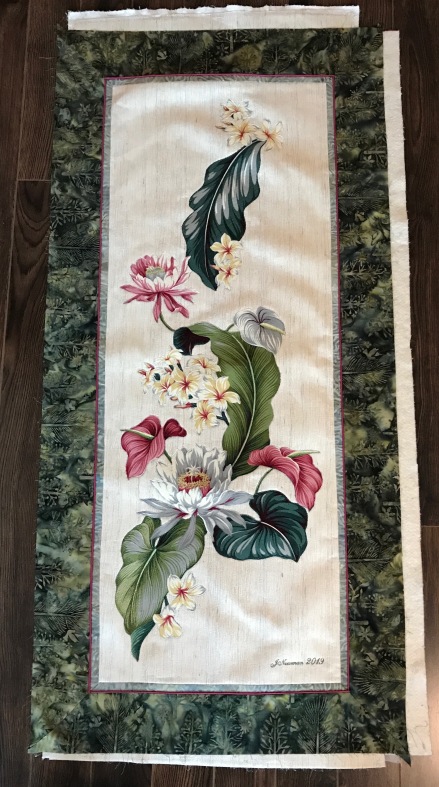 Then I began thread painting – this is going to take several weeks – there’s a lot of fabric to cover – I did enough on the leaf on the bottom left to give an idea of how I shade the colours using two different but similar rayon threads through my needle eye. This provides a bit more texture than using just a single thread and lets me fill in spaces more quickly.

Thread Painting Underway On A Leaf

My plan is to eliminate the grey on leaves and flowers using other shades to in-fill spaces. In this leaf, I’ve used pale greens/yellow greens to stitch in the grey areas. I also did pistils on the anthuriums, flower stems, and leaf central veins while I had a specific thread combination on the machine. This is not my usual way of working but in order to share technique with the gals I did a lot of skipping around.

Now I need to settle in to resume thread painting; this weekend I plan on finishing this leaf and move on to the darker green one above. I also need to baste the edge of the outer border to the batting so I can more easily move the piece around while threading painting.