We started the day early by driving a distance toward the northern mountains from Ubud to the start of a trail through a series of rice paddies back to town – something like a six km walk downhill. 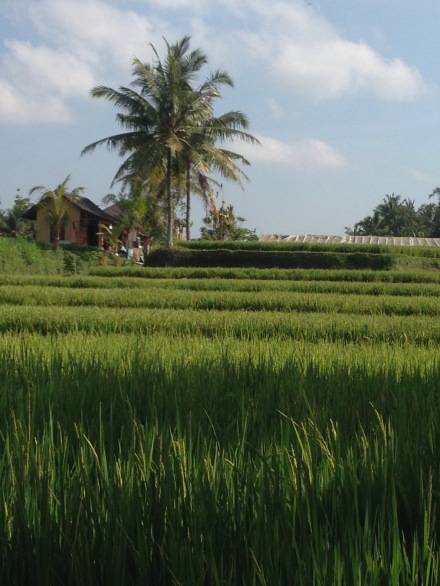 The paddies were of various sizes – some smaller ones obviously intended to feed a family; some of the harvest from the larger ones probably would be sold.

The path was narrow, we needed to walk single file; nevertheless there was quite a bit of motorcycle traffic going in both directions. When a motorcycle came into view we had to step to the edge of the ditch beside the paddy to let it pass – not always easy to do.

Some of the families have been enterprising by building small shops on the path – they sell art, trinkets, food items, gifts, you name it. However a majority of the shops were closed for the day due to a big religious festival where thousands of people get dressed in their going-to-temple white outfits and walk from Ubud to the ocean – a bit of a hike. In the afternoon we saw the procession returning in 100 trucks all decorated and carrying a load of people and large religious statues.

What became obvious as we got closer to Ubud, was just how much construction is going on (much of it resorts being built) which in 5 years will likely obliterate much of the rice paddies. If tourism remains stable or grows that will mean income for Bali, but I couldn’t help wondering how the poor will be able to afford imported rice – the essential in the Balinese diet.

Later in the afternoon I visited a spa not far from the Rama Phala Resort where we’re staying. I had chosen a traditional Balinese massage. The masseuse began by loosening every joint starting with my feet – I go for a massage regularly at home – this was unlike anything I’ve experienced before. When the gal was done, I was so relaxed I could barely move. Quite wonderful – to be recommended to anyone visiting Bali. There are spas everywhere so I know for sure I’m not the only visitor to take advantage of the service. I hope to be able to have another massage before I leave.