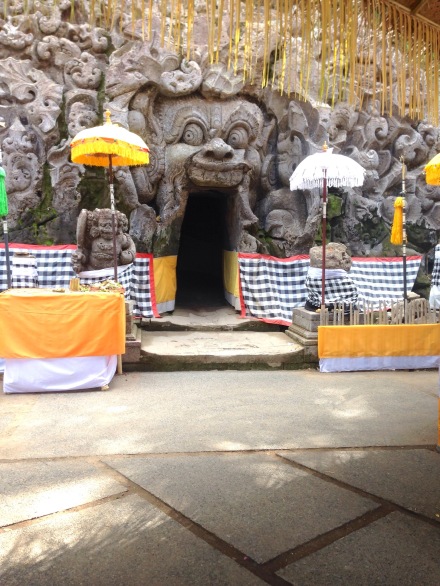 Temples are everywhere in Bali! Only a few are open to tourists. The elephant temple is an ancient temple rediscovered by Dutch archeologists late 1800s. Restored for use after a 1918 earthquake knocked down some of the walls. It’s a small cave and really has nothing to do with elephants. Because there have never been elephants in Bali. There were a number of shrines in use today on the temple grounds – there were people placing offerings at some of them.

Notice how everything is cloth wrapped – an indication of the importance of textiles in Balinese religious life. White and yellow signify holy/happy – the black and white represents good/evil. On ceremony days men worshipers dress in white; the women in colorful clothes. It is considered polite for visitors to a temple to wear a sarong and sash which we did.

Further down into the valley is a Buddhist temple – I knew I would not be able to climb the stairs back up, so I waited for those who went to see the temple below to return.

We’ve been hearing about women’s responsibilities, which are many: to shop for food, to cook, to care for children and elders, to prepare the many daily offerings (for many, today, to work as well outside the home). As far as we can tell men have few obligations. Here we see one of them: to prepare the bamboo for the women to make baskets for carrying food offerings to the temple and elsewhere. In today’s world in a good many households these baskets would be purchased ready-made in the market absolving the men from the labour. It really does seem that women bear the burden of keeping Balinese life going. 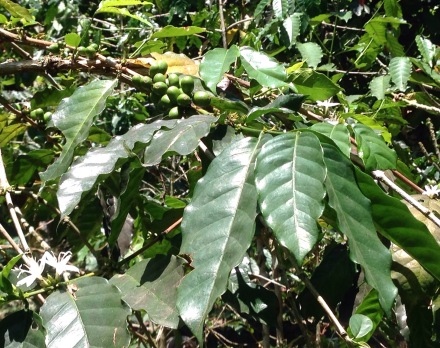 Next stop a coffee plantation – it’s an example of eco-tourism in action. The site has the two kinds of coffee grown on Bali, as well as cocoa, vanilla, ginger, coriander, black pepper… Bali also produces luwak coffee – coffee beans that have passed through the digestive system of civet cats! Very expensive. They had caged civet cats on the plantation for visitors to see in addition to being fed ripe coffee beans (the cats reject unripe beans!). I don’t know whether there was a population of wild civet cats or not – if there were it would require people to gather cat scat in order to recover the digested coffee beans. The beans aren’t actually digested, the hulls remain and have to be removed before the coffee can be roasted and ground.

There were also some ginger plants – the unopened buds are sold in the market and used in cooking. 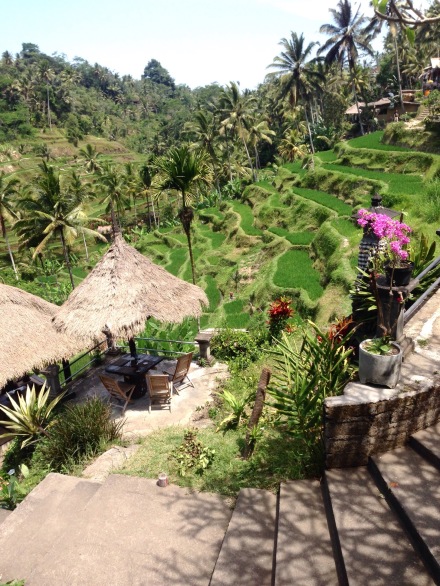 We stopped for lunch at a ridge overlooking some lush rice paddies. No one was working in them – too hot midday – they work early in the morning while it’s still relatively cool.

A final stop on the way back to the hotel was for ice cream – a welcome treat on a hot day!