A lovely day that began with a goofy mistake. I arrived at the Lunenburg Fire Hall a bit early. It was sunny (although still cool) and as I was waiting for the others to arrive, I decided to walk across the parking lot to the water’s edge to photograph the ships in the harbour, so I got out of the car and locked it – keys still inside! Thanks goodness for CAA. I had the car open again within a half an hour. Fortunately, that wasn’t a sign of how the day would unfold.

We began with Laurie showing and explaining to us a recent art quilt piece – a beach with a family of five, ocean, hills in the background, the seaweed high tide mark… A very lovely image and as usual beautifully executed. No photos, however.

Then we explored some new techniques by “constructing” a small house. It was interesting to see how the building is assembled from many layers. The other women completed the house and stopped there. But I still had a spare background from yesterday, so I added the house, quickly created two evergreen trees and a bush to add some further interest. Then I put in a path (using free motion embroidery to set up paving stones. I began adding “grass” but didn’t get the whole space thread painted (this after all is just a sample). Finally, trimmed the edges and bound the piece – still needs hand sewing on the back.

Notice also, the mullions in the windows and the edge of the roof which were also thread painted.

So with a bit more work when I get home, Sample #2 is actually a tiny art quilt. (It could use a chimney on the roof, I think and I may add one when I get a chance.)

We spent the rest of the day doing some prep work for the larger pieces we’re each working on. First, Laurie gave me a transparency created from the photo I gave her. I decided, in the end, to try the asparagus field. The transparency is put on an overhead projector, projected on paper tacked to a wall. The main elements are quickly sketched in. Then the tracing process is repeated on large sheet of tracing paper. These two tracings are used as templates and to reference the overall composition as the piece unfolds.

Next comes painting paper with fabric ink which when dry is transferred to a wide strip of poly-cotton fabric to be the sky. The sky is laid out on top of the paper template, and I next spent some time auditioning fabrics for the various elements in the picture.

I will need lots of trees – some will get created using the cobweb lace we learned yesterday. I spent the afternoon creating a tall evergreen tree (I got about half-way through it when it was time to leave, I’ll finish the tree tomorrow.)I used an pale blue organza fabric as the base, since the top of the tree will be against the sky. My free motion stitching is improving rapidly, I’m relieved to say.

So tomorrow, I’ll take a picture of the work in progress so you can understand how it’s unfolding. I also hope to begin constructing the house which will be the focal point of the work. The real challenge is going to be the asparagus field. I have a batik with yellow, peach, soft greens. I intend to overlay that with some golden/orange organza, but I need something more – whether it’s dyed cheesecloth in a suitable range of colour, or whether I will do thread painting on the surface, I’m not sure. I did pick out thread colours that will work and I had brought a metallic thread in the right shades – I’ll have to do some experimenting to see what might work.

Oh, and a couple more pictures of Lunenburg: 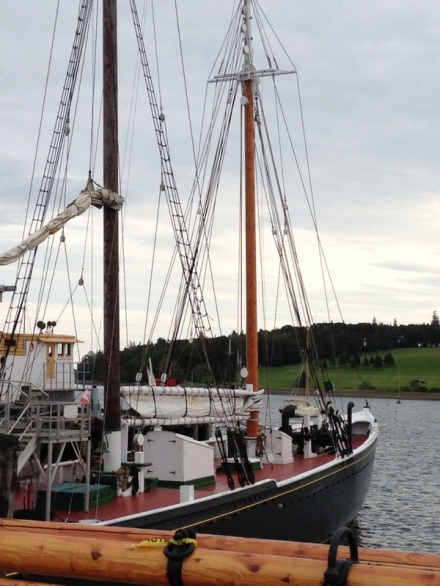