I took another look at the Vogue pattern and decided, instead of reworking it yet again, to go back to some pants I made this summer – a pattern without center front/center back seams.

The pattern this summer was for a simple pair of palazzo pants (New Look 6191): 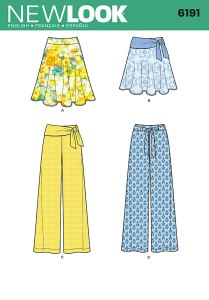 I didn’t make the pants in the pattern, I slimmed down the legs quite a bit, I put in a fly front, I added pockets to the outside on the front. All I used from the pattern were the dimensions and shape of the front and back panels. As you can see below, the front falls nicely, sits on my upper body comfortably. They still had a bit too much fabric in the bum, though. 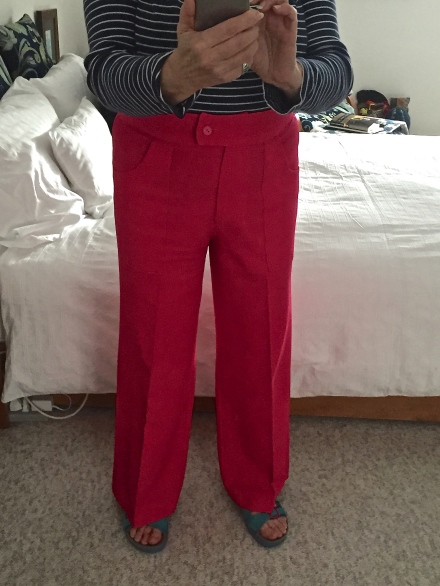 So I thought I’d rework this pattern, using what I’d learned from the previous two muslins – I shortened the back crotch at the inner leg seam, increased overall crotch depth just a wee bit, shortened the center back seam 3/4″ (to raise the bum fabric up a smidgen).

This time, I decided not to use muslin but to make the mockup using some navy twill I had in my stash and if the pants worked (more or less) I’d have an actual pair of pants I could wear. So I narrowed the legs even more (I wanted straight legs that weren’t tight in the thigh or calf but not too loose either). Unlike the previous muslins, I applied pockets to the front and to the back. I went back to the curved waistband on the Vogue pattern and adjusted it to fit my upper hip snugly. And in creating the pattern I incorporated the fly piece into the front panel (I still had to use the fly flap for the back of the fly opening). Just finished the pants this morning. The front falls nicely, no pulling. 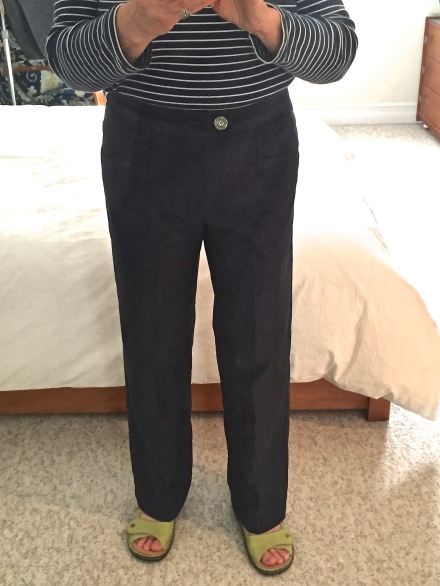 The side is pretty good, too. You can see a slight dip below the bum where there is still a bit too much fabric but I think I’ll wait until April and Sandra Betzina’s class in San Francisco – I’ll take the pattern and the pants and I’ll get her to help me with this problem. 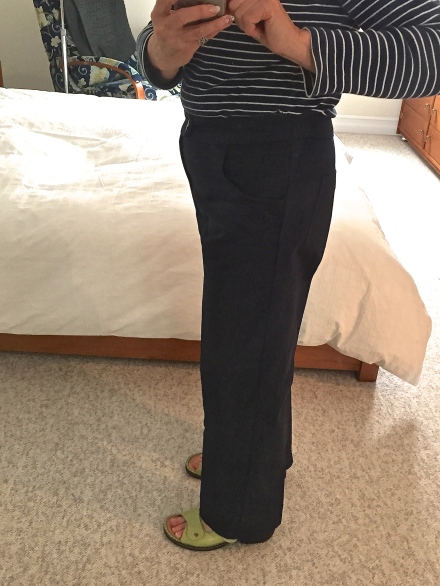 Hard to tell from this photo but the back is also pretty good. That fullness below the bum which shows in the side isn’t too obvious in the back. 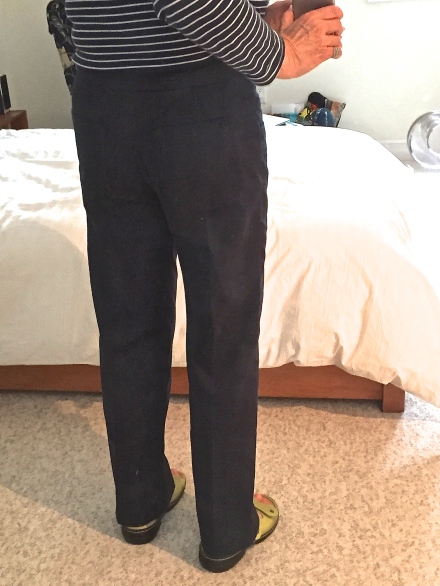 What I ended up with is a sort of jeans-style pants with jeans style pockets on the front, jeans back pockets, and straight legs. I can definitely wear these pants (even though I managed to use the wrong side of the fabric on the front panels and put the fly in on the wrong side!).

All in all, not a waste of time. If I could just find some decent corduroy I’d actually make another pair from this adjusted pattern just to see how they’d turn out in a heavier fabric. I’ll go shopping next week to see if I can find something.