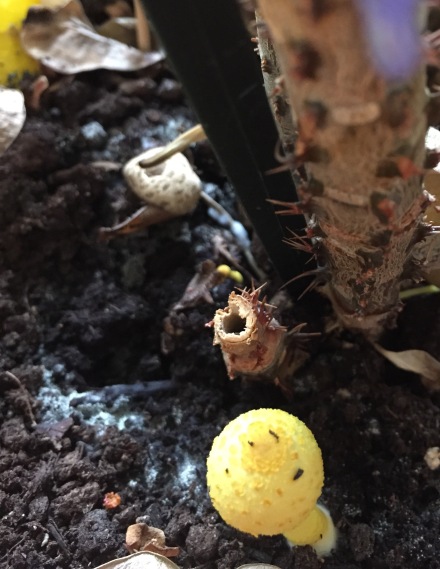 Well, this was a surprise this morning! Little yellow mushrooms in the pot with the crown of thorns. So I take a closer look, then google to see what’s growing – I have Leucocoprinus birnbaumii, the yellow houseplant mushroom! 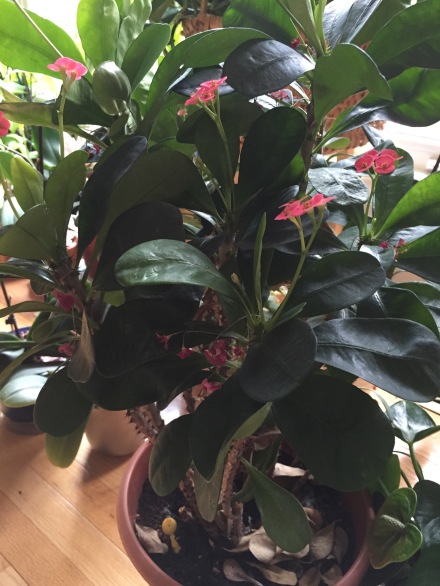 I’ve had this crown of thorns for nearly 20 years so I have to infer the spores arrived recently. So what do I do to get rid of the fungus?

There is a chance that spores from Leucocoprinus birnbaumii will travel to your other plants and infect them as well. So if you don’t want a house full of yellow mushrooms… you can try one of the following to get rid of them:

Remove the plant from the house – Either put it outside or get rid of the plant entirely. No doubt the simplest solution.

Attempt spore removal – Pick off all visible mushrooms from their base and replace the top few inches of potting soil. This may or may not work, depending on how deeply the fungus has grown into the soil.

Replace the soil entirely – As a last resort, you can try replacing the potting soil entirely. Remove the plant and try to get as much dirt as possible off its roots. Know that by doing this you may stress the plant, and the mushrooms could very well come back anyway.

Truthfully these mushrooms are very hard to get rid of. As the spores and mycelium (the vegetative growth of the fungus) are deeply settled in your plant pot and roots, it’s difficult to remove them entirely.

Well, I don’t want to get rid of the plant – it’s growing well. I will remove the mushrooms and as much of the mycelium as I can see. Add some fresh soil and hope for the best! I’ll dry out the pot – the plant is after all a cactus and will likely be happy dried out – to see if that helps.

I’m not concerned about the mycelium – I just don’t want spores infecting the rest of my indoor garden.