Yesterday I pieced and attached the border for the circles panel. I had originally intended bordering the top using an almost black and an off white printed fabric. But when I opened out the border fabrics and laid out the panel on them, it looked all wrong. So I decided to try a border of graduated colours.

I auditioned the fabrics and thought it could work. Next I cut 3 1/2″ strips and placed them adjacent the panel. I cut pieces, mitred them together (including the corners) and attached the border to the quilt panel. But something didn’t feel quite right. I took some photographs. And when I looked at them I could see my problem: the bottom border had the mitres going in the wrong direction – your eye is pulled immediately to the yellow bottom left corner: 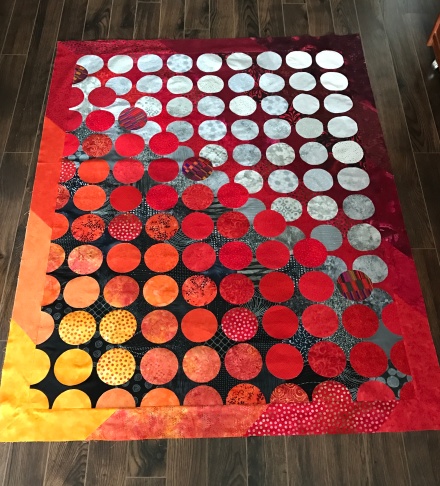 I was going to live with it, but this morning when I got up I decided to fix that border. I knew I couldn’t just realign the joins – my border would be too short. So I started from scratch, cut new strips (or used what I had leftover from the first border), sewed them together and attached the border to the quilt, 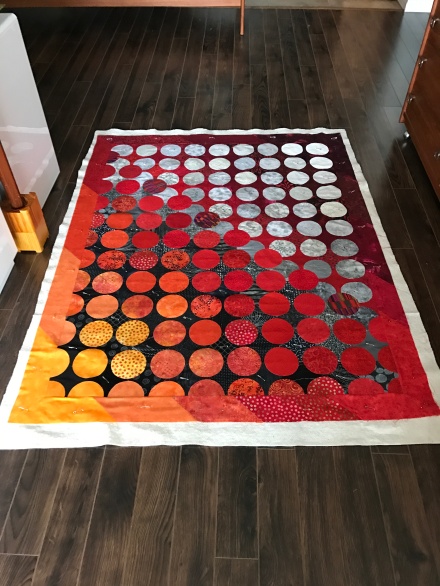 It’s really quite interesting how that mitre direction makes such a difference. Now the colour story flows from top left to bottom right and the eye moves around, sees the shades of pale greys fading into the medium greys, into the darker greys/black at the same time the yellow blends with the oranges and reds rather than standing out.

Wouldn’t have thought it would make such a difference.

I have my embroidery machine set up with rayon thread (I have selected several shades of red), a new embroidery needle (an embroidery 75), my sewing star foot (which has an open toe), and a narrow blanket stitch. The quilt top has been pinned to batting and I’m now ready to stitch around all the raw appliqué edges. I won’t get to that until Thursday – tomorrow I have to return to Parrsboro to pick up the two quilts I left behind for the art exhibit featuring all the artists who had shown during the season.

4 thoughts on “Who’d Have Thought…”