The project continues. Today I worked on the house, creating a door, windows, and adding chimneys – by building up the elements rather than cutting into the building facade and placing the elements behind the openings – that’s because the raw silk I used for the building frays so easily.
Next I incorporated the house into the setting, stitching it in place with a fine monofilament thread. 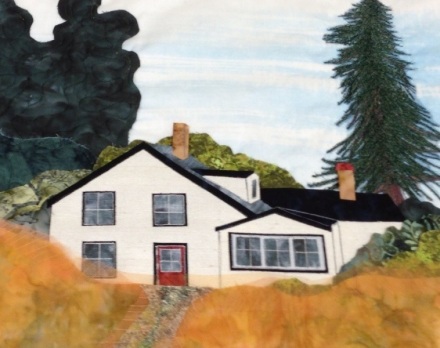 I also stitched the tall spruce in place and trimmed away the organza from the edges – next time I’ll know to leave a lot of organza around the element – it was difficult cutting the excess away because I had little to hold on to!
I’ve also played some more with the asparagus field – adding in leaf vein pieces along the top edge and beside the path. I’ve added a second layer of the orange/gold organza to blur the detail of the fabric beneath – tomorrow I will need to stitch all of it in place to hint at the stalks, but not make them too obvious.
I have also begun working on the evergreen trees behind the house – I added tree trunks and a couple of major branches (which will be mostly covered up when I’m done) – I put a layer of cheesecloth over the trees in the background to suggest the spiky branches of the trees, it may need a second layer and something more in the trees nearer the house. 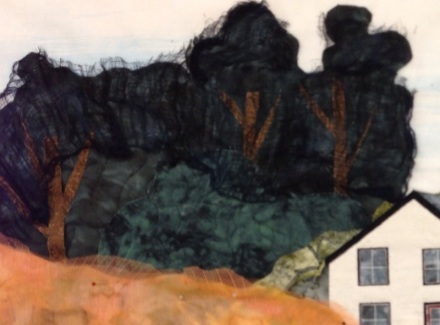 And of course, there’s still some kind of bare deciduous tress needed on the right side – still no idea how to construct them,
First thing tomorrow morning we’ll put our projects on display to see how far everyone has got.

My piece is really beginning to look like a real picture:

And a couple more pictures of Lunenburg – it was a lovely sunny day today – supposed to be a hurricane tomorrow!

One thought on “Asparagus Field – 2”